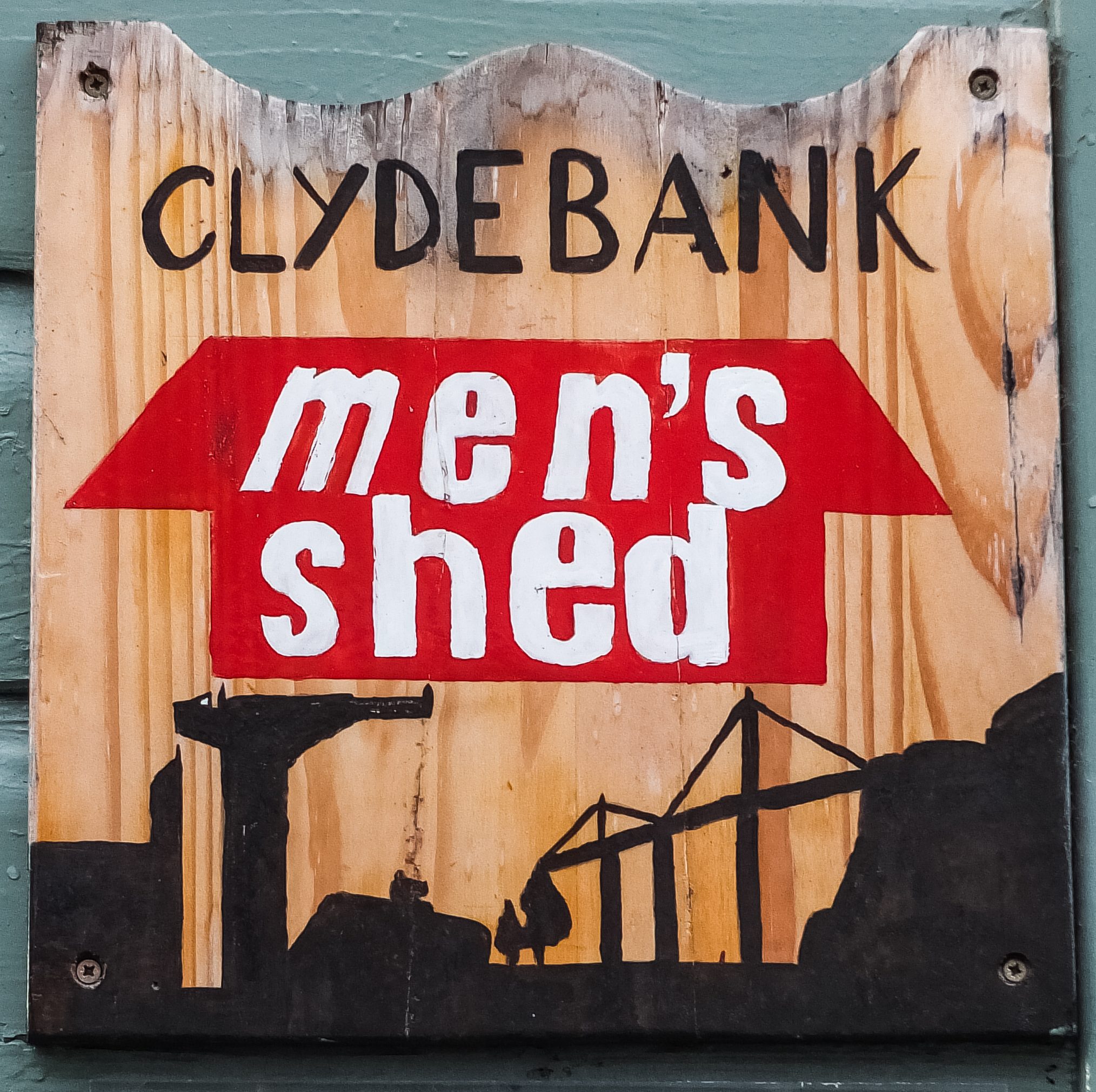 Billy Connolly famously joked, “Where do all the old guys go? Where are all the welders, hole borers and riveters on the Clyde?”

Well, a lot of them are in Clydebank Men’s Shed, sharing their expertise, their advice and their banter.

But Joe Gherardi , the new chair for Clydebank Men’s Shed, is trying to spread the word that the Shed is not just for the “old guys”.

“It’s not just for retired people to come down and ‘potter about,’ although if you want to, you can.

We welcome all age groups.

“Our older members very much enrich the shed community in Clydebank giving freely of their time and knowledge to help more inexperienced woodworkers like me.

“There are many joiners and ex-joiners involved, furniture and cabinet makers, engineers – a wealth of talent.”

A chef to trade, Joe has learned so much since coming to the Men’s Shed.

To try and encourage a younger age group they recently extended their opening hours to include a Saturday Joe explained: “One Saturday morning, I spotted a young guy in his car.

“He had sat outside for two years while his daughter attended a class next door.

“He thought the Shed was just for ‘old guys’.

“I showed him around and now he’s a member and loving it.

“The weekend opening means he can come on a Saturday.”

How The Shed Began

Ian Petrie, founder member of the Shed joins us.

Around 10 years ago, he chanced upon Oban’s Men’s Shed and it inspired him to set one up in Clydebank.

Together with four others, he strove to get funding.

A group of eight would meet first in a room in Clydebank Town Hall, before moving to the Hub.

“We finally got these abandoned premises in Dalmuir, which were a bit of a state with loads of stuff to clear out, but we got there, and after a cheque for £150 from the Provost, Clydebank Men’s Shed was born in March 2016.

“Our aspiration was to have a place where men could meet for a blether and local tradespeople could pass on their knowledge to others.”

Joe’s son, Douglas, in his thirties, is testament to this intergenerational learning.

He specialises in making planters, but no ordinary planters, he has templates of various dogs and his Heilan’ Coo planters went down a storm at the Drymen Show.

“My Dad got me into it and I love coming along…I’m here most days!”

Joe shows me photos of the Men’s Shed then and now.

He is delighted with their new kitchen which gives members a proper space for making teas, coffees and lunches even.

As well as being a safe space for men to share their skills and ideas, the physical safety is something this Men’s Shed take very seriously.

Joe explains: “There is a defibrillator on the wall outside, I have my First Aid certificate and some other members are signed up to do a First Aid course.

“Billy over there, gives everyone an induction in the use of machinery.”

“We have to be sure members can operate it safely.

“Even though they may have years of experience of using equipment, we still need to see it for ourselves.”

Joe’s main concern as new chairman is to ensure the longevity of the Shed, as well as future-proofing it.

“People don’t really know who we are or where we are, we have to change that!

“We need new members to keep the place going.

“You don’t have to be an experienced woodworker, you can learn from others.

“Come along and see us. We’ll show you around.

“We’re in the two green sheds next to Dalmuir Community Centre, at the Dalmuir end of Duntocher Road, near the station.”

“Also sponsors cover our phone and Wi-Fi bill… we can’t thank them enough.”

A few years back, Joe was asked to come down to TG Allan’s hardware shop in, Helensburgh.

The owner was retiring and closing down the business.

He told Joe he wasn’t to cherry pick, he was to take the whole lot, lock stock and barrel!

Founder Ian also donated some tools and widows often donate tools when their husbands pass away.

They recently had to regift tools to charity because they had run out of space.

The Shed now has 125 members with around 20 regulars, including the ‘Birdman of Cumbernauld’ specialising in bird boxes.

“Men can come on a drop-in basis and get on with whatever they want to work on,” Joe explains.

“There are helping hands if you want help….If you don’t want help, that’s fine too.

“You don’t even need to do any work, just come for tea, coffee, biscuit and a blether…it’s a valuable mental health project: come along and put the world to rights.”

One member tells me he had not wanted to leave the house for years and felt isolated.

He is a regular and his life has changed for the better.

It’s not all long-standing members either. Brett, a retired engineer, has been coming for a couple of months.

He loves the Shed atmosphere, finding it welcoming and friendly.

He is currently working on a secret Christmas project which demands endless patience and all my admiration.

Brett designed and made all the moving parts himself and is at the all-consuming assembly stage.

His next project will be a cracker: it will take at least a year and a half and has something to do with a trip to Egypt.

Ian also has an interest in Egyptology. He shows me photographs of an Orkney chair he made, I was bowled over by his skill.

“I would like to build a Pharaoh’s chair,” he reveals, a look of determination in his eyes.

Men’s Shed members also get involved with projects to support other local charities and organisations.

They have done work for Old Kilpatrick Food Parcels, Clydemuir Primary School and an old folk’s home in Dumbarton.

Joe’s ambition is to have a purpose-built two storey Men’s Shed and he would love to visit other Sheds on a fact-finding mission.

I love that ‘can do’ attitude: it kind of sums up Clydebank Men’s Shed.

“Have a laugh, don’t take yourself too seriously, have a chat and in the background you can be productive or not be productive, do what you like, just go with the flow…”

My morning in the Men’s Shed flew by and I didn’t want to leave.

What I discovered there was vision, passion, fun, interesting chat, all that coupled with productivity, creativity and just general well-being.

And contrary to Billy Connolly’s portrayal of the Shedders, there were no “old guys” there, more boys with their toys.