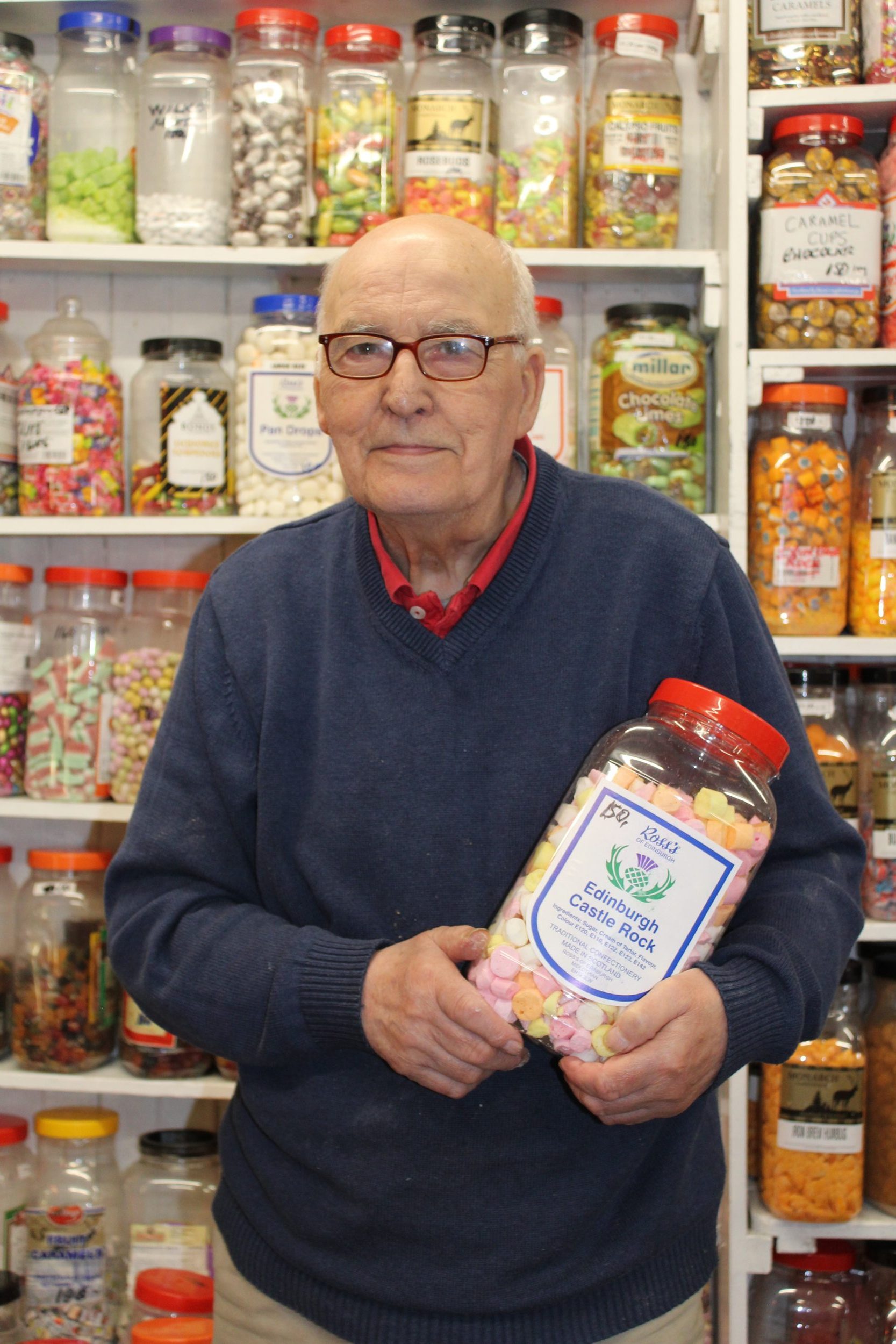 Walking through that familiar red door in Renton, first-time visitors are hit with an instant sweet aroma.

For those of us who have become regulars over the years, the nostalgia gets you first.

That’s right, we’re in Tom Swan’s Sweet Shop where I am instantly transported back to the days of strolling along on my school lunch break for a pot noodle, a quarter of chocolate nibbles and five chocolate cups (no one tell my mum!)

The shop hasn’t changed too much in that time and Tom’s cheery, sometimes mischievous face is still greeting customers from behind the counter, as he has been for over 65 years.

Rows and rows of sweet tubs line the walls, an explosion of colour and texture everywhere.

Everything from strawberry bonbons to Renton Rock call on me to buy them, but I walk away with the nibbles and chocolate cups, plus a wee cheeky bag of jelly babies for my gran.

The memories those sweets brought back had me smiling all day.

The shop was originally a general store but with the growing number of supermarkets, Tom decided a change was needed.

“We used to sell fruit and veg. Potatoes. Every Thursday we would get a big delivery of trays of cakes from Tunnocks and we would be queued out the door.

The shop was originally run by Tom’s grandmother who bought it in 1946.

Since Tom took it on, he’s been there almost every day. As he said, “that’s been a lot of shoes.”

He now takes more time for himself and often doesn’t open until mid-day.

He’s seen a lot of changes in the local community over these decades and has felt the impact of many of them.

Most recently the Covid pandemic.

“We shut completely until November 2020.

“I had to shield due to my health. That was strange but I got to spend more time gardening,” he said.

With Tom shielding and the sweetie emporium being closed for the better part of the year, Tom and his family had to find ways to keep the business running and adapt to the times.

That’s when his daughter Margaret turned to the world of social media and started offering local deliveries.

“We put a message on Facebook in June 2020 during lockdown saying we could do deliveries and the orders went crazy.

“We were only going to do two days a week and we ended up doing four. That was just Alexandria and Dumbarton.”

It wasn’t long before requests to post tasty treats all over the UK and beyond started coming in.

“A lot of the postal orders are to people who used to stay here.

“They go to people down in the Borders, London and Northern Ireland,” Margaret said.

The shop and the man are both legendary in the village and beyond and the support that Tom receives is a testament to that.

He even has a street in Renton named after him!

Cris, a young man formerly of Renton, now living abroad, described his childhood visits to Tom’s as “walking into an Aladdin’s cave of confectionery.”

“Wall to wall was filled with tubs containing every imaginable colour and shape of sweets.

“I’ve been living in Korea for more than 10 years and when I’d visit my hometown it often felt a little sad to see things change but it was always comforting to see Tom and his store still there, serving as a constant focal point in the community.”

To join in sharing the love for Tom and find out what is going on in the shop, join The Official Tom Swan Appreciation Society on Facebook