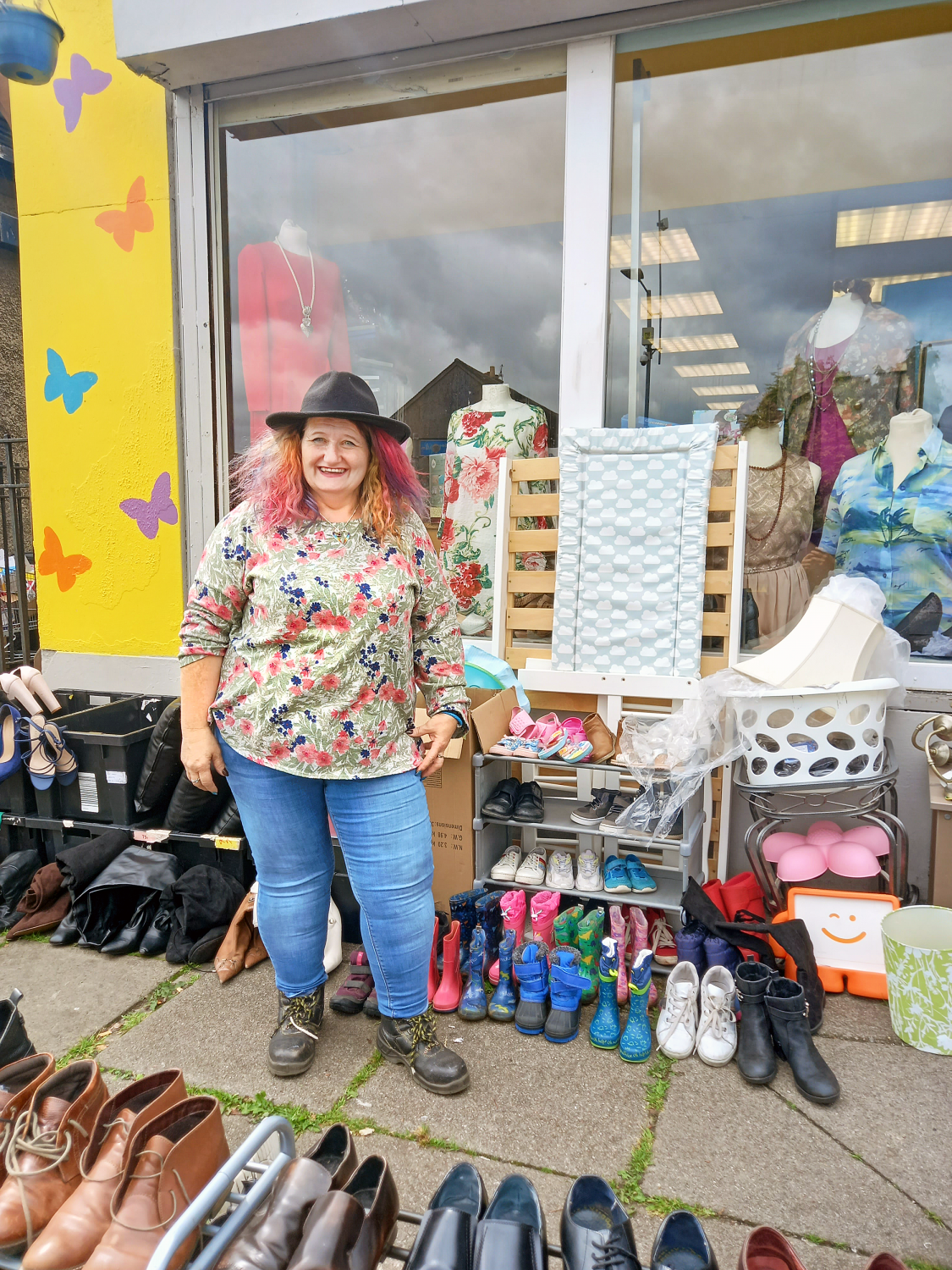 So it takes a special kind of person to build something positive from the tragic loss of two young lives.

It was the untimely death of Arthur, a homeless man in Glasgow, which started Melody Whitley from Balloch looking for ways to help people.

And this journey has led her to open a ‘free’ community shop in a building in Clydebank where local student Paige Doherty was murdered in 2016.

Melody explained: “It all started when my friend and I decided to not buy crappy Christmas presents for each other.

“Instead we decided to buy a Christmas dinner for a homeless person through the Social Bite website.

They were expecting about 700 requests for meals and ended up with over 10,000. After that, I thought I should be doing something more.”

Doing What They Can

With no experience and not really sure how to begin, she managed to get together a group of helpers including her daughter, who all went to Cadogan Street in Glasgow.

The team of volunteers took clothing to distribute and gave out over 200 sandwiches, made and paid for by themselves.

Melody said: “The food went within five minutes, but the chat went on till midnight.

“There was only one woman there the first week, the second week there were more.

“A lady came up to me and we were chatting, it was minus six at this point, it was freezing.”

She said ‘I was told you had clothes.’ I said “yes, just open the boot and take what you like.”

As the conversation continued, the woman said her friend Arthur had told her to come and get clothes.

Melody didn’t know who she was talking about until the woman gave a description.

She then recalled Arthur.

He had come in the first week and was so tall none of the clothes would fit him so she told him to come back the following week.

She said: “I told Arthur my nephew had lost lots of weight and I knew his stuff would fit, I had it with me that night to give to him.

“I offered to give it to the woman to pass on to Arthur, but she informed me he had passed away.

“He was 30 and had died of hypothermia.

“I was angry. Angry at myself, at the world. Why didn’t I think to go straight up with the clothes?”

Even though Melody knew she couldn’t have prevented his death, it made her more determined than ever to keep going and help as many homeless people as possible.

They introduced hot food after Arthur’s death and started receiving donations from restaurants that had food left over when Covid hit.

They also received donations of clothes.

Unfortunately, many were unsuitable for people on the street, especially items like high heel shoes and suits.

Melody said: “We were getting so many clothes donations that people living in hostels or on the street couldn’t use.

“They need things which are easy to wash and dry because all they’ve got to wash things in is a sink or a shower.

“So we had all these clothes and toys donated to us that we couldn’t move and I’m not binning it, as I don’t do clothes for cash.”

A New Start After a Terrible Tragedy

For Melody, it was perfect timing when she was approached and asked if she would be interested in a shop in Clydebank.

She didn’t know where it was, but just knew it would be a great opportunity to distribute the clothes she had stacks of and do something for the local community.

When she discovered the shop was the Whitecrook deli where 15-year old Paige had been murdered, she was a bit apprehensive and didn’t know how it would be received by people living in the area.

She knew she had to speak with Paige’s family before anything was decided.

The family agreed to the shop being opened and used in a positive way to help people.

Melody said: “I spoke to Paige’s mum, Pamela and she was happy for it to go ahead, so we said yes and got the keys in March.

“We started decorating and just changed the interior of the shop and put a little kitchen in.

“The people in the community have been absolutely fantastic and are happy the shop is open again.

“People have said it has improved the area and it’s really busy.”

The shop has become a positive community space for Whitecrook.

People come in and get clothes or household items, or they can just pop in for a cup of tea, sit outside and have a chat.

“People are no longer walking by the shop, staring in as if it were a reminder of what happened.

“And the wee colored butterflies on the wall help brighten up the building. It’s great.

“People come and donate stuff and it helps others out and it’s not costing anything, in these times that’s a good thing because people cannae afford a lot of stuff.

“People come along and sit outside on the chairs, they have a chat and it gets them out of the house.

“A lot of people have suffered mentally over the Covid period, it has definitely helped me with my mental health.”

Everything in the shop is free and there are no criteria to ‘shop’.

However, to ensure the goods are distributed fairly visitors are restricted to five items per week.

The shop in Fleming Avenue, Clydebank is open on Monday, Wednesday and Saturday between 10.30am and 5pm.

Donations can also be made on these days and times.

For more information contact Melody Whitley on 07966062495 or email Info@help4thehomeless.co.uk