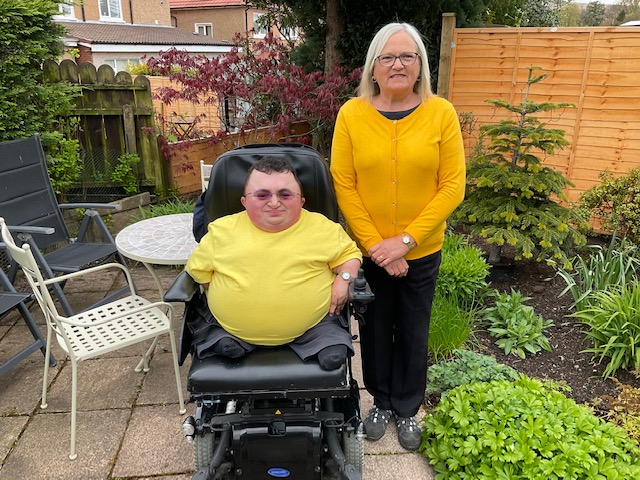 “I have Osteogenesis Imperfecta (OI), also known as Brittle Bones.

I have received support over the years from the Brittle Bone Society who recently launched their OICAN May Campaign to make May official ‘OI Awareness Month.’

The Brittle Bone Society is based in Dundee and was started by the late Dr Margaret Grant OBE to support individuals with Osteogenesis Imperfecta and their families.

Margaret had OI herself. When her daughter Yvonne was born in 1961, she noticed there was very little support for people with OI and not much had changed since she was a child.

In 1968 Margaret placed an article in the Sunday Post newspaper to find other families who needed support, this was the start of the Brittle Bone Society and what is thought to be the world’s first support charity for people with OI.

Having OI means my bones can break very easily. I am small in stature; I cannot walk and I am a powered wheelchair user.

I have broken my bones many times, the last time was at the start of the pandemic when I broke my leg and was in bed for many weeks.

I don’t get an X-ray or wear a cast as my bones are very fragile and both these things could make it worse.

I try not to let my disability stop me and when I was in bed, I started hosting Online Quizzes, when they were still very popular.

I also did one to raise money for the Brittle Bone Society.

The Brittle Bone Society does great work including organising events to bring people effected by OI together and help access funds for wheelchairs and other specialist equipment.

Earlier this year the Brittle Bone Society started their OICAN May Campaign to make May Official “OI Awareness Month” in the UK.

There is already Wishbone Day on May 6.

This began in Australia in 2010 and is now celebrated all over the world. On this day we wear yellow, events are organised and awareness is also raised on social media.

I think an OI Awareness Month would be a great way to make more people in the UK aware of Osteogenesis Imperfecta and the challenges we face.

It will hopefully make more medical professionals aware of OI as there are still many who have never heard of it.

I would also like to see better medical services for adults with OI, similar to what most children with OI receive.

As part of the campaign I wrote to local MP Martin Docherty-Hughes asking him if he was able to sign the Early Day motion in support of the campaign or alternatively raise the issue in parliament or share on social media.

I’m sure many others also wrote to their MPs. Myself, along with many others, have signed the BBS Patient Charter online and shared on social media.

If successful, official OI Awareness month will begin in May 2023.

More about the society and the OICAN May Campaign can be found by searching Brittle Bone Society on Facebook or on the BBS website www.brittlebone.org where you will find the charter which can be signed by anyone.”