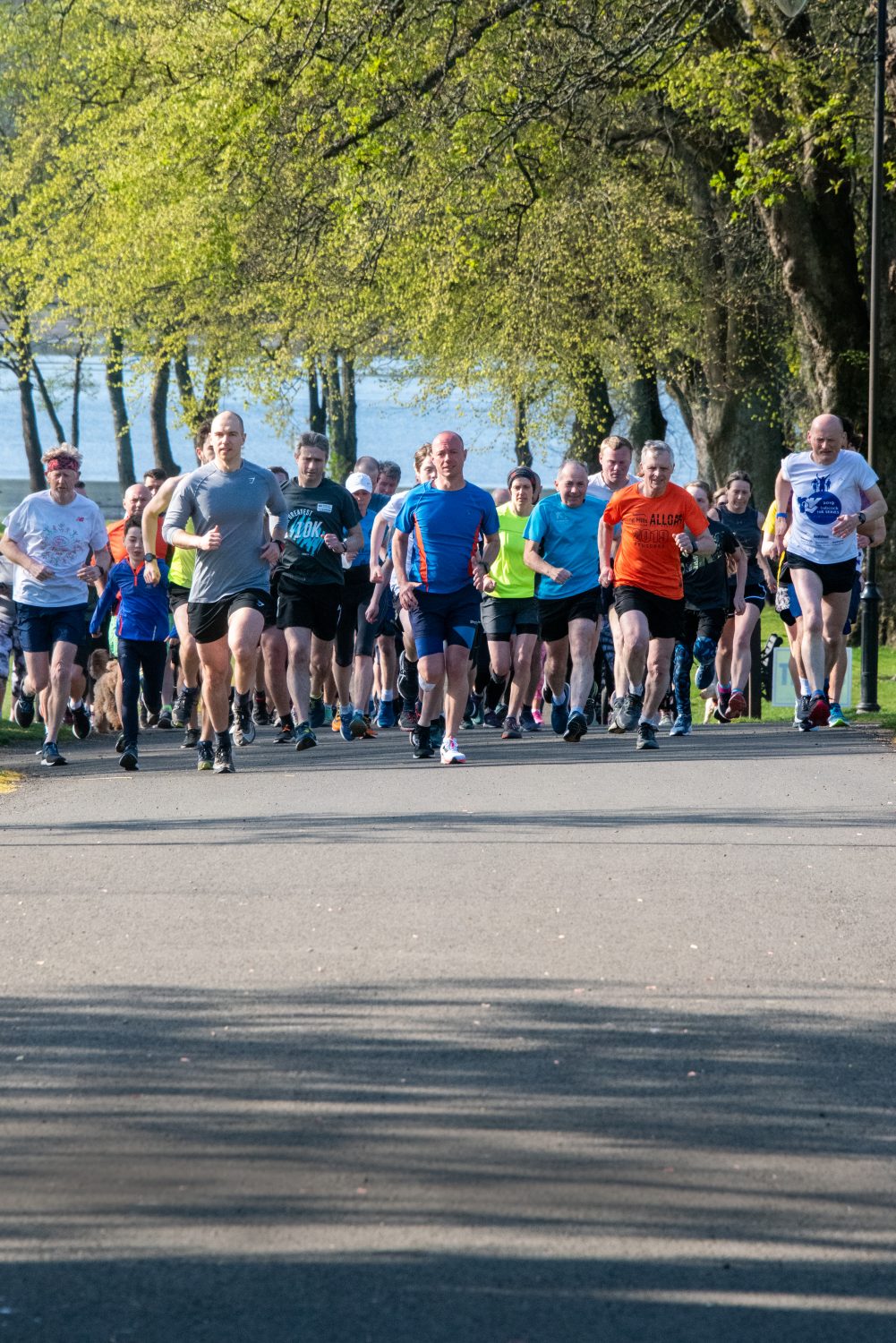 It’s a dreich Saturday morning but the parkrunners are out in force, and so are the army of volunteers in their fluorescent pink high-vis waistcoats.

My Dad used to famously say: “It’s not the winning, it’s the taking part that matters,” and the parkrunners embody this spirit.

Come rain or shine, they are ready to go.

It’s not about being the best, it’s about being together, running alongside, rather than in front of each other.

Anna Napier, one of the run’s volunteer Run Directors, explains it is very much about the team effort: “Levengrove parkrun was started by a group of volunteers, including myself, back in 2019.

“We didn’t know each other at the time but we all had a shared desire to bring parkrun to our local area, so that brought us together and we’re so glad we made it happen.

“It’s a massive team effort from everyone on our core team and all our awesome volunteers.

“Parkrun is a global movement, entirely free for everyone, forever.” Annie continues to tell me.

“There are volunteer-led runs all around the world every Saturday morning – 5K that anyone is welcome to walk, jog or run.

“Children are welcome and under 11 s can take part as long as they are within an arm’s reach of an adult, but it is 5 km, 3 miles, so it’s quite long.”

She shows me a map of the course: three laps of the park.

“You sign up for free online at parkrun.org.uk and then you can walk, jog, run, bring your dog or a buggy.

“You can take as long as you like or go as fast as you want. There’s always a “Tail Walker” at the end.

“This week, Margaret in the orange bib is our Tail Walker. Her role is to go at the very back so nobody is ever last at parkrun!”

Right on cue, Margaret gives us a wee wave.

Anna explains they need about 20 volunteers to run the event and thankfully, their dedicated volunteers turn out Saturday after Saturday to help.

Anna’s son, Sam aged 11, picks up the story: “I started to volunteer as a marshal, just because I thought it felt nice to be able to add some support.

“If you’re volunteering, you realise people are feeling good because of you.”

Another volunteer Run Director, Theresa McIntyre, one of the original founding members of Levengrove parkrun is today’s Run Director.

She adds: “The fantastic feedback we get from the volunteers make it worthwhile.

“They’re posting lots of things on our page or messaging us to say how happy they are with the set up in Dumbarton; how friendly the volunteers are and how well-organised it is.”

Steven Fitzpatrick, a first-time visitor to Levengrove, barely audible over the squally wind, comments: “I have never seen so many marshals. It’s really well-organised!”

At Levengrove parkrun, volunteers arrive more than an hour before the runners to do a course inspection, set up all the equipment and mark off the course.

The Run Director briefs the volunteers on their roles so everybody knows EXACTLY what they are doing.

Nobody arrives without a friendly greeting and you do feel warm and included.

Even on this blustery day, a little beam of sunshine smiles up at me – at the start line, someone had chalked a love heart for the runners.

A touch that didn’t go unnoticed!

A Stunning Location For a Run

Levengrove, itself, is a stunning park with the shimmering Clyde at the foot of the hill and the impressive Dumbarton Rock presiding over proceedings.

It recently benefited from a £2.8million facelift and is well­ maintained, well-used and, most importantly, well-loved.

“This run has everything,” enthuses another first timer.

“Castle, water, trees and up and down paths. It’s more challenging than it looks!”

As the runners struggle up the very deceptive hill behind the Pavillion café, cries of “well done” echo over the wild wind and stinging rain!

I spare a thought for Matt, dubbed “the hardiest volunteer”, on duty down at the Clyde.

On a day like today he definitely lives up to his title.

Lindsay Theobald, another of today’s marshals, shouts her encouragement.

She is immensely proud of her runners, especially those who don’t think they can do it.

She loves to see their progress.

“When they cross the line and say, “oh I’ve beat my time from last week or I’ve done this … ” just seeing how proud they are of their own achievements is probably the best part of it, for me.”

I tell Lindsay I don’t think I could manage it, but she insists: “Oh yes, you could!

“Anybody can do it, trust me, anything is achievable in small steps! You just need to run, walk, run, walk.”

Today’s runners round the corner and one by one their rain-spattered faces break into a smile at the applauding marshals.

There must be around 70 folk here today, men, women and children of all different ages, stages, shapes and sizes, each with their own reasons to be here.

One face who is missing is the late Davy MacDonald who used to stand by the three bollards at the Clydeshore Road entrance.

Runners would pass Davy three times during their run and he would wave enthusiastically.

Sadly, Davy passed away in 2020, so Parkrunners are currently fundraising for a fitting memorial for “Wavy Davy’s Corner”.

Amongst the runners, I spot tiny Lewis Collins aged 4 whose wee legs somehow manage to carry him round alongside his dad, Kenny Collins, every week.

Anna and Sam praise him: “He’s a wee superhero. An inspiration.”

His dad, Kenny agrees: “He’s fantastic! He’s now done about 16 parkruns. I think he’s one of the youngest, he does the full 5k.

“There is talk of a Junior parkrun which I’m going to be helping out with and he’ll take part in that too, but he just loves all the spirit, cheers, and all the positivity that comes with the parkrun on the Saturday and he looks forward to it.”

Anna confirms. “Yes, Levengrove is about to have a Junior parkrun. It will be a separate 2K event that happens on a Sunday for children from age 4 to 14.”

Clearly, the parkrun is creating a “healthier and happier planet” as it aspires in its mission statement.

Founded by Paul Sinton Hewitt CBE, it is now in its 18th year with 2,200 locations in 27 countries.

Its positive impact is indisputable: you just need to look at the parkrunners this morning to see it.

One of the more mature runners, Rose Harvie, beams widely as she crosses the line.

She is a Levengrove regular: “I love it so much; I even wrote a poem about it.”

The morning at Levengrove parkrun concludes with some parkrunners heading into the delightful Pavillion café for a post-run treat.

As I sip my hot chocolate, I realise this non-runner has really loved her morning and would happily return!

• Began 2 October 2004 with 13 runners and 5 volunteers at Bushy Park, London
• Originally called the Bushy Park Time Trial it became parkrun in 2008
• First event outside UK was in Zimbabwe in 2007
• There are 1, 103 parkruns in the UK
• There are 10,212 parkrunners over 80. Age is no barrier.
• parkrun tourism has become a ‘thing’ with some runners visiting parkruns around the world.