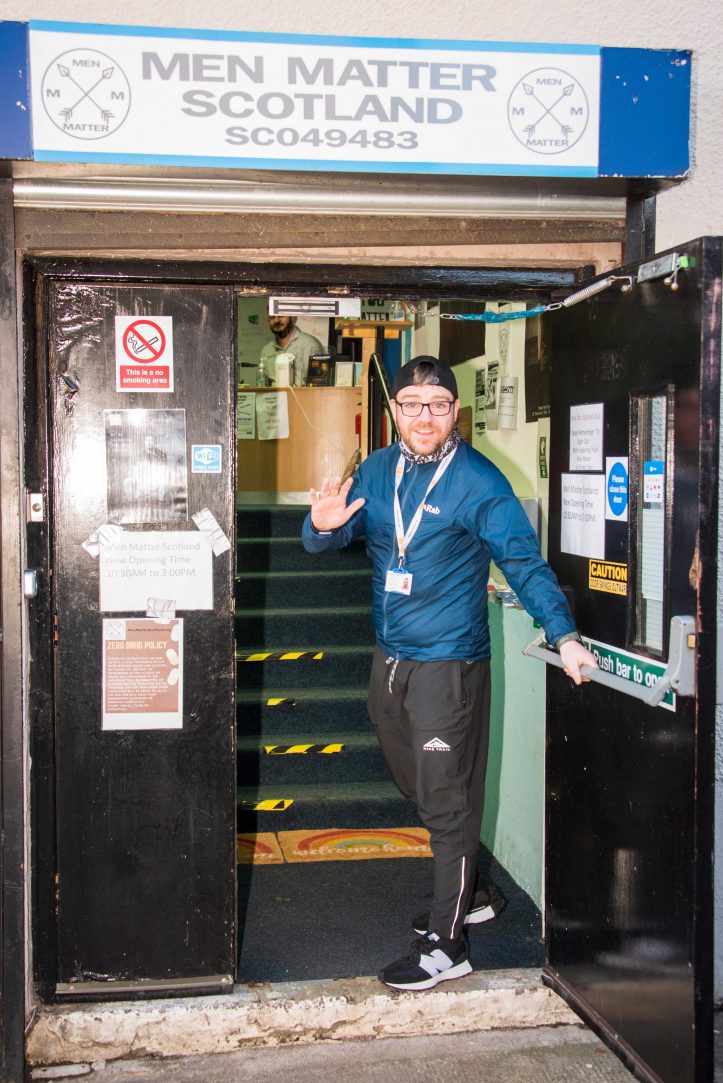 On a quiet, nondescript lane there is a plain, unexceptional door.

What is behind the door, however, is a sanctuary, solace and supporting community for men.

In 2019 three men came together in the Chest, Heart & Stroke unit to provide help and support to one another.

Just over two years later and over 1,200 men have joined Fraser, Gregor and Peter.

Every single one of these men matter, as founding member Fraser Devine explains.

“We would meet up just to have a chat, talk about what we were going through and try to help one another.

“As time went on and the more people we spoke to about our meet-ups, we realised there were loads more men like us but there wasn’t much help for them.”

Fraser is now the organisation’s Team Leader at Men Matter Scotland, with co-founder Gregor Ritchie taking on the role of General Manager.

However, it is more than just a job for them, it’s a family.

“If someone phones us up or texts us to let us know such-and-such hasn’t been seen in a few hours, we get the jackets on and go look for them, no matter the time of day or night.

“When we tell our guys we are there for them, we mean it. We know how hard life can be, we still have our bad days,” Fraser adds.

As the group grew, more space was needed to meet the demand but also to allow room to offer the men a multitude of activities to help improve their wellbeing and prevent suicide.

That’s when Oliver’s Restaurant kindly stepped in and offered them part of their building that wasn’t in use.

Based in Drumchapel, men from all over Scotland visit the hub daily.

“We get an average of seven referrals every day.

“There are no waiting times, no boxes to tick. Everyone who comes through that door is welcomed as a brother.”

That welcome is most certainly felt. As I am given a tour of the hub, every person I pass says hello or gives me the obligatory west of Scotland ‘how ye doin?’.

Walking from room to room, having a nosey behind each door, I find something different to cater to various likes and needs.

Co-founder Gregor explains the group has cherry-picked projects, principles and activities which have proved successful around the globe.

One day members can try out the music room, the next have a workout in the gym. If you need a quiet safe space to have a one-to-one, there are rooms for that too.

There’s a therapy room for the guys to have a reiki or mindfulness session and a soundproofed one for making their podcasts.

During the summer they run ‘Go Wild on Fridays’ which involves getting back to nature. Every few weeks they head somewhere rural for natural living, cooking underground, and sleeping under the stars. 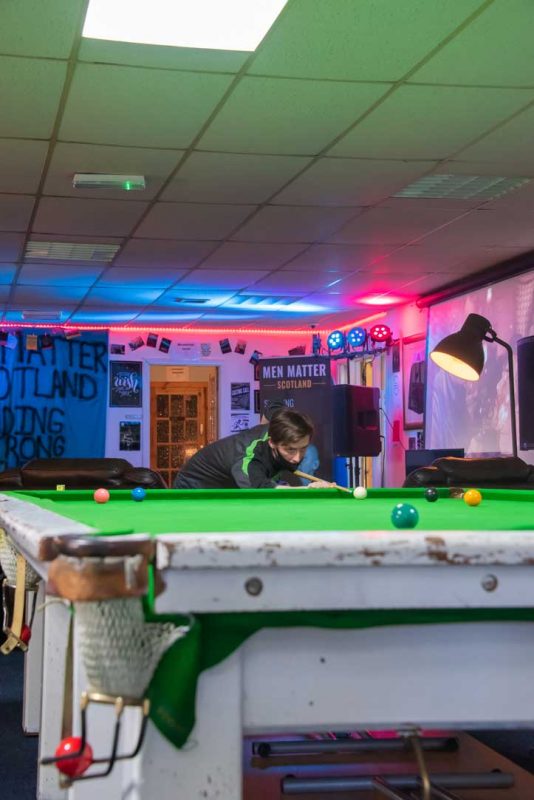 Gregor explains: “We want to provide a safe place for men to go.

“I know boys who aren’t here any more and they were looking for somewhere to belong and couldn’t find it.

“There are brotherhoods in Scotland based on religion and politics, but not any based on love.

“It’s a word many guys are uncomfortable with, they think it’s about sex or relationships but we see it as those positive connections we can all make with each other.”

Ian Wallace needed love and support after his wife died.

“When I lost my wife I hit the drink.

“Coming in here has really helped me.

“Sometimes I come in and I’m a bit down and I start talking to the guys, someone will give me a hug and I’m back up again.

“I feel part of something here.”

In the art room eight guys are spread out over two large tables, heads bowed concentrating on their individual pieces of work.

They each introduce themselves and share what the weekly art class, run by Salvino Volpe from Clydebank, means to them: “I feel more relaxed in here, more content in myself,” says one member.

Another adds: “I’m more confident in myself, I used to be shy.”

“I had bad social anxiety – would worry about what people thought of me. Coming to the art group helped me change that,” says a voice quietly from the corner.

This statement causes a pause in conversation, as most of the men reflect on it while continuing to put pencils and paintbrushes to paper.

Willie breaks the silence: “Most of my life I have been let down by services. When I came here, I wasn’t afraid of dying, I was afraid of living.”

He continues to talk about his life but always comes back to his gratefulness and appreciation of the organisation, “there’s no limitations or timelines on access to these services.

Every one of the guys here are great, we all help each other, good days and bad days.”

The nodding heads confirm they all feel the same way, including art teacher Salvino, “we have art class once or twice a week, but I come here to help the guys and sometimes they help me too,” he adds.

The art group has had field trips and artists workshops to try different styles. Their long-term plans include a more structured course, exhibitions, and trips further afield. 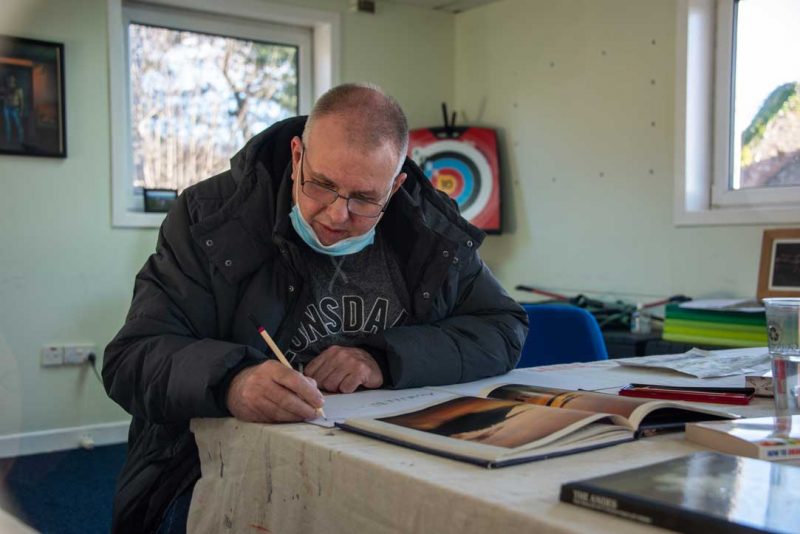 All this while fundraising to ensure the organisation’s survival.

“We’ve had a couple of small grants which have been great but most of our money comes from donations from the community, in particular families who have lost someone to suicide.

“We want to give back more to the men and the families that need our help and support,” Fraser adds.

The organisation is also aiming to encourage more men to get involved before they need help.

Gregor explains: “This is just the start, we’re only officially two years old. We want people to realise this isn’t just a place for men who are struggling, we’re somewhere you can come at any time.

“There are just three criteria – you’re a man, you live in Scotland and you’re ready for positive change in your life.”

To find out more visit the Men Matter website or  call 0141 944 7900 or email contact@menmatterscotland.org

Listen to the Men Matter podcasts on Apple, Spotify and Soundcloud. 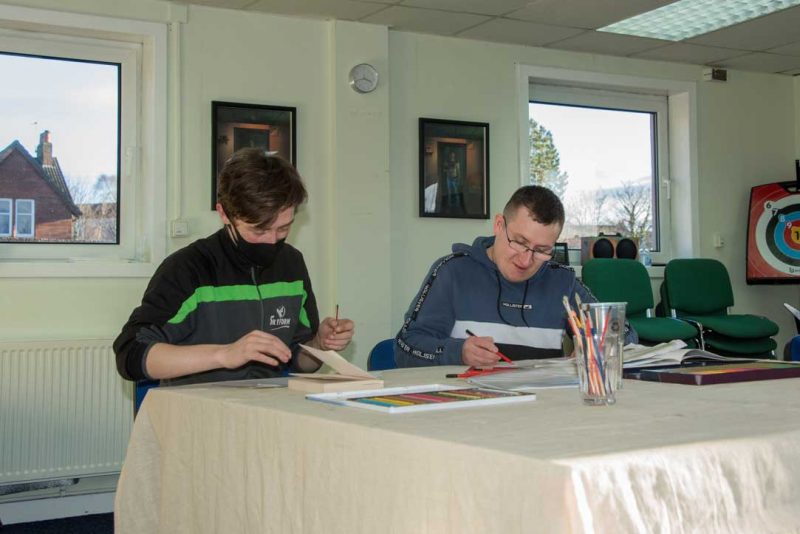