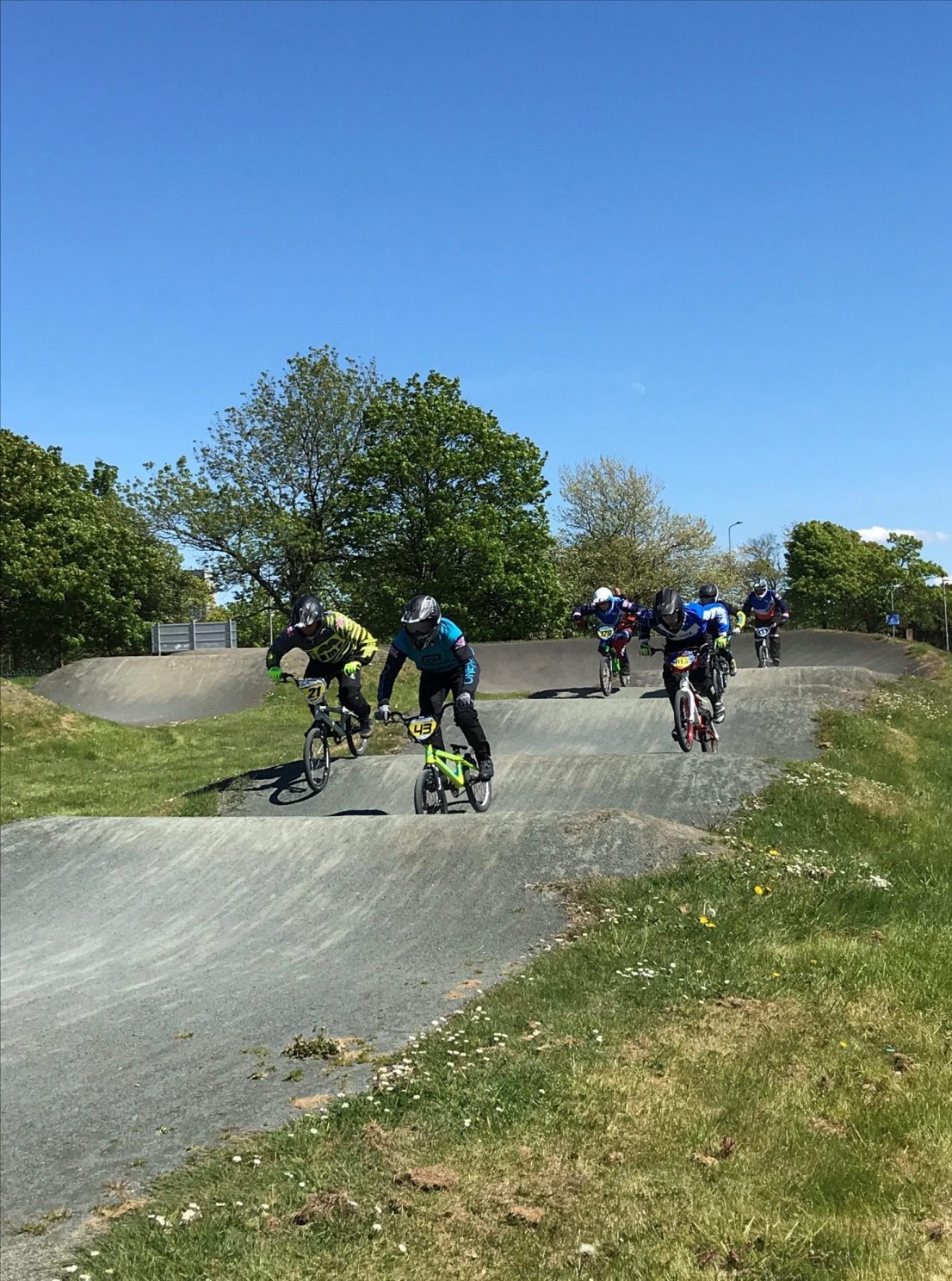 A line of eight youngsters perch on bicycles at a precarious angle, facing down the steep slope of a track on a sunny September evening.

Their faces are focused, glimpsed through the oversized helmets which cover their heads and extend over their mouths.

There’s the loud crash of a gate falling, and they’re off, riding low and jumping high over humps and bumps around a gravel and tarmac track.

Less than a minute later, the race is over, and winners and losers fist pump each other cheerfully at the finish line.

This is BMX, and these are members of the Western Titans BMX Club, based at the track on Onslow Road, Drumry.

The Drumry BMX track first appeared in the 1980s.

Founder-member Kenny Scullion explained: “My mum got the old track done. She went to hundreds of meetings in the community.”

The track was rebuilt in 2005 after the Environmental Trust asked local people what they wanted, and Western Titans Club formed a year later.

Kenny added: “I used to do a lot of racing in those days. I just went up to watch the opening race in 2005, and they asked me to start the club after that with Kenny Hunter.”

Riders come in all ages, ranging from four to 50+, although they are mainly children and teenagers, and mostly boys.

Young Jack ‘the Track’, 13, lives locally and spends most of his free time here.

“I love coming to this track. It’s free, it’s open all the time and you can just come on it without any bother,” he said.

Jack did his first novice races here this year and is now up with the experts. He thinks BMX is ‘cracking’.

Alexis, 12, started BMX when she was five and is now Scottish female champion in her age group and eighth in Britain.

She said: “I wish there were more girls doing it, as it’s mainly boys in our club.”

She’s looking forward to competing in the BMX World Championships when it comes to Glasgow in 2023.

BMX is a real family affair.

Young riders rely on a strong support system, whether it’s fetching their water bottles, putting air in tyres or just being there to cheer while they’re on the track.

The club is run entirely by volunteers; the coaches get no payment for their services.

Everyone does it for love of the sport and the pleasure of seeing many a shy youngster come out of their shell and gain their confidence on the track.

Western Titans depends on its small army of parent volunteers to keep the club going.

It can get hard when funds and resources are scarce.

He said: “We want to do many things with this track and the club to set it firmly on the map in the West of Scotland.”

Local companies are key to helping out. Cycleform Bike Shop, Hardgate and Dem-Master Demolition are club sponsors, also having family members riding in the club.

The recent Olympics sparked renewed interest in BMX, so the Titans counted themselves lucky to meet Kye Whyte and Beth Shriever just weeks before their Olympic victories!

The young people had a coaching session with Shanaze Reade, two-time Olympic competitor and ambassador for the Glasgow 2023 BMX World Championships.

Shanaze’s advice – you don’t all have to be winners, because taking part in an activity you love is just as or even more important.

Being on a BMX bike is an invigorating experience and watching is good fun too. If you’re passing by on one of the Club’s training days, pop over and see them in action!