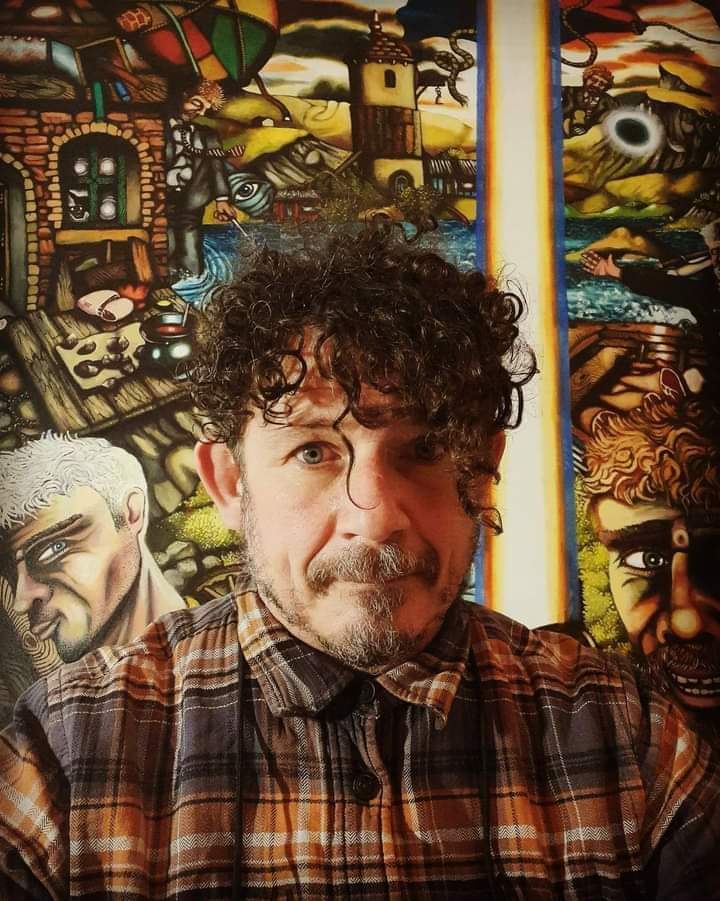 Scott Walker, aka Wingnut Walker, chooses to put paint on canvas to express the world around him.

And what a colourful, detailed, intricate world it is!

Talking with Scott via our digital devices, I get a real flavour that his art often depicts real life.

In the small square of the screen, I see mostly colour, from the bright summer hues of his t-shirt to the array of shades and tints on his paintings in the background.

“I’m inspired by real life events, things that happened to me or things I see or hear,” he explained.

“There is a lot of humour in the stuff I do.

“My work is interpretations of what I’ve seen, poems or songs I’ve heard.

“The piece usually starts with a small idea or a simple image and I think ‘I could add that or add that’ and then it’s gone from one simple thing to 75 things in the painting, which is the way I like to work.”

Having moved to West Dunbartonshire months before the pandemic struck, Scott was inspired and thankful for the beauty on his doorstep.

Life wasn’t always so peaceful for him, in fact for many years he struggled with emotional and physical issues until he was referred to a neurologist.

“I always had tics growing up and when I get stressed, they get worse,” he explained.

“They can become quite painful.

“Within minutes of meeting the neurologist she told me I had Tourette’s.

“It was a strange feeling because I felt it explained most of my life, why I have trouble concentrating and get frustrated when I couldn’t do things properly.

“At school I couldn’t do anything but art because of my difficulty with focussing.

“Art has been therapy for me all these years.

“Drawing and painting helped the tics slow down and stop because I was doing something I was enjoying.

“It was great to finally find out why I am the way I am.”

Scott has been creating art since he was a young boy at school and attended Art School in Bath where he completed his degree.

After finishing his studies, Scott wanted to take a different path in life and successfully applied for a role within a volunteer organisation who sent him to Glasgow in 1990.

The role was working in a residential homeless project and was only supposed to last one year but this quickly became a paid post and Scott worked in the sector for 27 years.

During that time he continued to do a little bit of art here and there when he could, even showing work in a few galleries.

He decided a change was needed in his life and it was time to slow down and focus more on his art.

“Six years ago, I took voluntary redundancy and decided to become a full-time artist.

“I had been selling stuff online for about five years, doing bits and pieces but I just thought I’d give it a try and my wife supported that decision.

Scott’s style is definitely unique, as he takes his very active imagination and brings it to life on paper.

Hours could easily be spent just getting lost in each piece of work and seeing where it would take your own mind.

This is probably why the past year has been his most successful to date.

“I’ve had more commissions over the last 18 months than the previous five or six years and I think that’s down to lockdown.

“I try to adapt the requests and keep them within my style, I think that’s why the clients come to me in the first place because they already like how I work.”