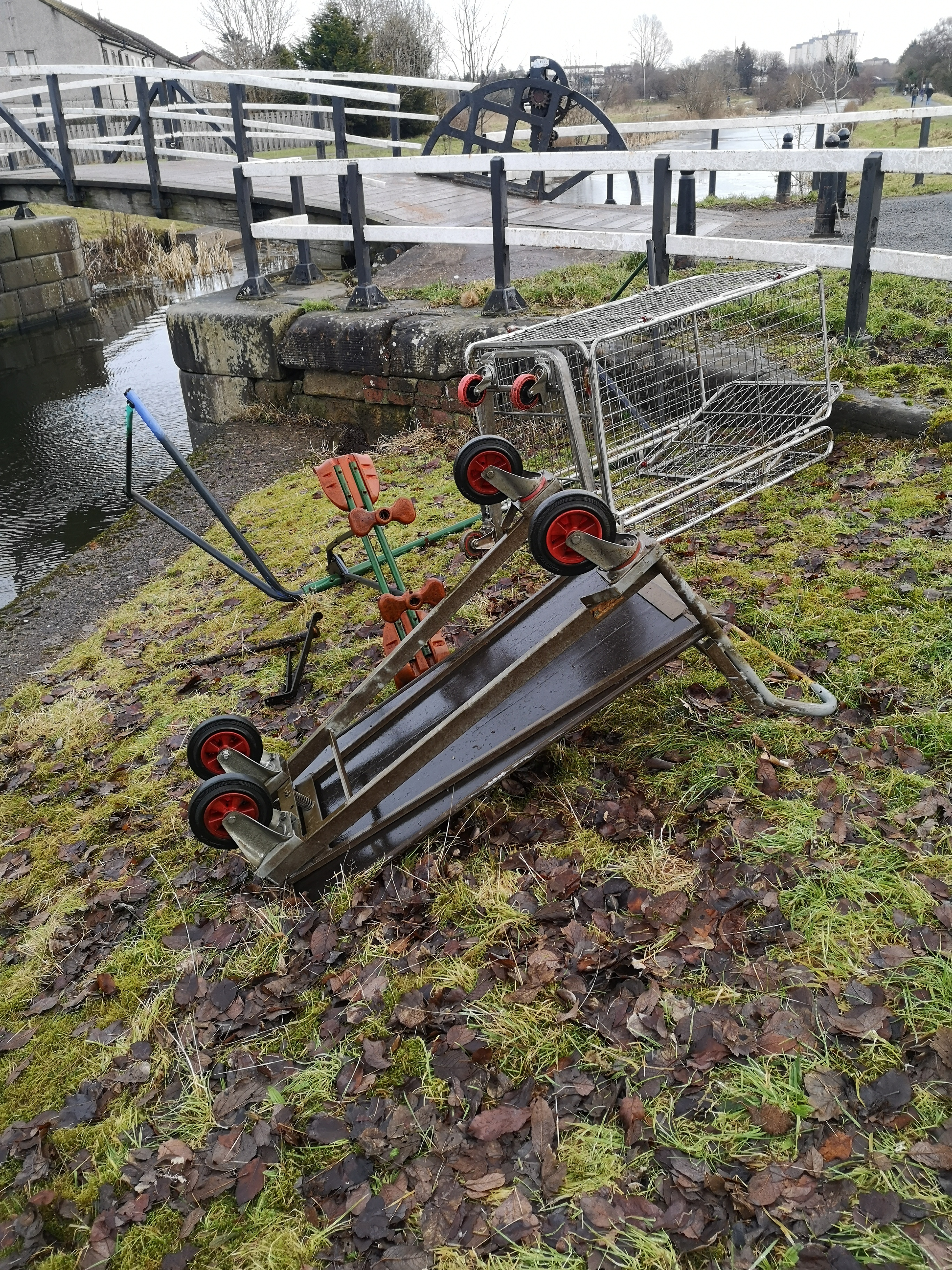 During normal times myself and the Cubs from 6th Clydebank Scout group would end our term walking from our HQ in Dalmuir along the canal path picking up litter.

At the end we’d get a chippy as a reward.

During the first lockdown lots more people started using the canal for daily exercise and escape from the sometimes imprisoning walls of their homes.

When the canal froze over for the first time in early January this year the problem became more evident.

Many discarded items were no longer hidden in the canal but were clearly visible on top of it.

From trolleys and traffic cones to a single trainer, bottles and a piece of the zipline from Linnvale playpark, they all surfaced.

Seeing this made me feel sick, knowing that one of the few things left that Bankies could be proud of, was just being used as a dump and for meaningless fun.

I immediately went home, grabbed an old boat anchor and length of rope and returned to the area next to McMonagle’s with my son and we began to remove what we could.

In the first three visits we have removed 30 trolleys, a swing set and a food cage from the area between Linnvale bridge and Swan bridge.

The main bulk of the trolleys belonged to Asda who were very helpful when we made them aware and sent staff to retrieve them.

The other trolleys are unfortunately from stores that don’t exist any more or are closed due to not being essential.

We have secured these, where possible, in a trolley bay as no one else will take responsibility for them.

There was only one trolley that had a pound coin in it, the rest were empty.

This likely contributes to them being dumped in the canal, if they were secured by the user correctly, they wouldn’t be as accessible to be dumped.

Do What We Can

In scouting we teach our young people about the values of integrity, care and respect, values I fear are being forgotten by some in Clydebank.

We should all try to keep the canal clear of rubbish which is detrimental to the water, fish and wildlife.

It would most definitely cause damage to watercraft using the canal in the summer.

If kept clean, the canal could help increase visitors and maybe encourage others to have a little respect for our wee town.

I will continue to do what I can until I’m told I cannot or until I no longer need to.

“Try and leave this world a little better than you found it.” said Sir Robert Baden Powell, the founder of Scouting movement.

Issue 16 is here!!A little later than expected but it made it in one piece and it's looking goooood!! We'll keep you posted when it's out in the community ready to be picked up and read!#clydesider #westdunbartonshire #issue16 #teamworkmakesthedreamwork ... See MoreSee Less

After five years of publishing Clydesider magazine and hosting a variety of creative activities and workshops we are making plans for our future.Please help shape Clydesider’s future by completing this short survey s.surveyplanet.com/-JuNkPjAAll entries received by July 5 will be included in a prize draw to win £30 (don’t forget to leave your email address to enter).Thank you, The Clydesider Team ... See MoreSee Less