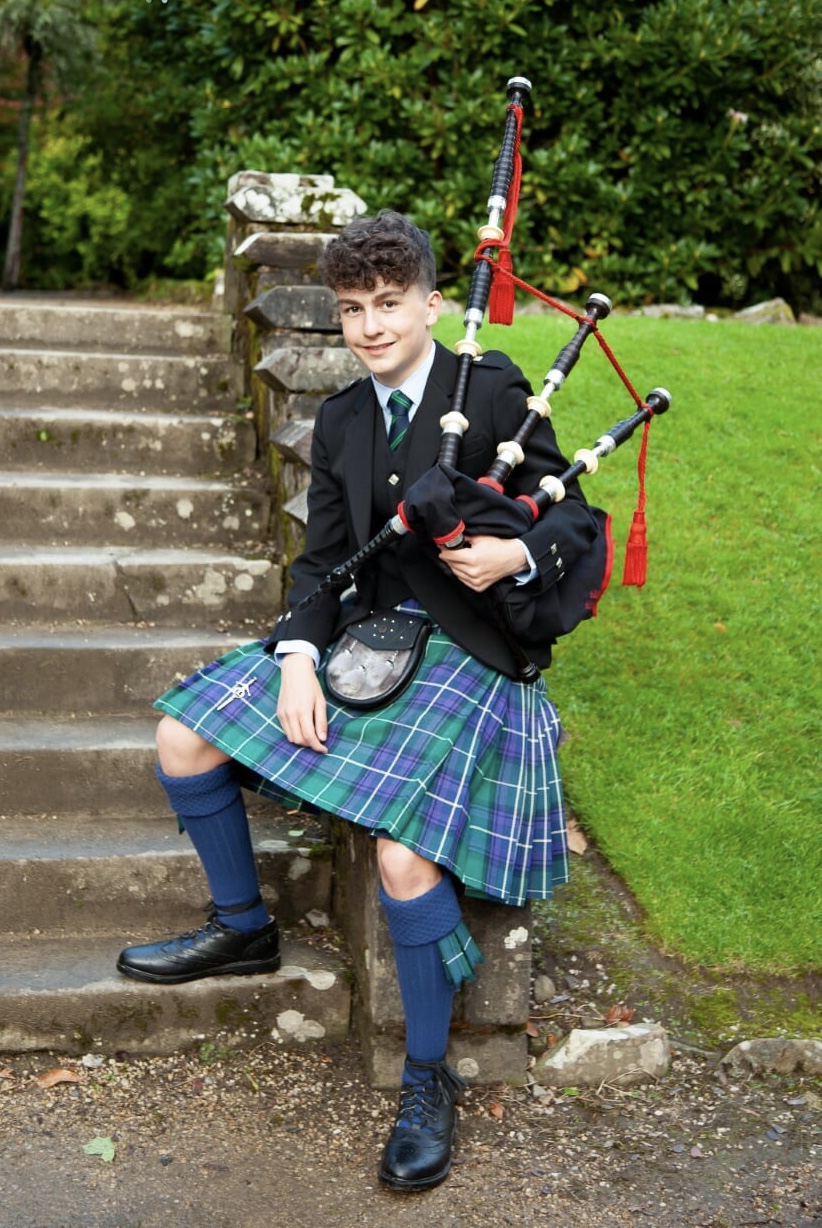 It will be a few years before we fully realise the impact this last year has had on our children but one local young man has been making a big impact himself.

Mark Morrison, 15, from Alexandria spent much of 2020 visiting local care homes and sheltered housing complexes entertaining elderly residents who were isolated from their family and friends during lockdown.

“It all came about when I added a comment on a Facebook page saying I played the bagpipes, if anyone would like me to come play for them.” Mark said.

From there his diary was filled with at least one or two garden concerts a week throughout last summer.

Before that Mark played his pipes outside for the Thursday evening clap for the NHS.

Quite a few of his videos went viral across the local area so a fanbase was building, and people were starting to know his name.

Kind-hearted Mark not only entertained the care home residents with his music but also raised over £3,000 to buy iPads for them to see and speak to their families who couldn’t visit.

He also donated copies of his DVD of music and songs.

These are a few of the many reasons why Mark was nominated for a Provost Award and is a finalist in the Arts & Culture Champion category.

Mark, and his family, discovered very early on he had a love of the arts and the talent to back it up.

At the age of three he started singing, winning his first trophy a year later.

When he was nine he began learning the chanter then graduated to the bagpipes at 11.

He has a busy schedule of activities to help improve his skills and abilities.

“At one point we were out of the house every night of the week going to various classes.” Mhorag, Mark’s mum, said.

Not only does he sing and play bagpipes, he is also a member of the National Youth Pipe Band of Scotland, takes piano lessons and previously attended the UK Theatre School, for drama classes.

Last month he was scheduled to perform in ‘Movies to Musicals’ at the Glasgow Royal Concert Hall, alongside an amazing cast of West End stars and musical theatre group Collabro.

This couldn’t go ahead in the Concert Hall but a virtual concert happened live on Facebook.

Looking To The Future

His main focus right now is his school work and while blended learning has had difficulties for some, Mark is managing to stay on target with all of his school requirements.

“I want to do as well as I can in school because while I love playing the bagpipes and singing, I am not sure if I want to have a career in it yet,” shared Mark.

Although he may have discovered a niche market, as there are not many pipers who also sing in the same performance.

In fact, according to his coach there is only one…Mark!

To say this is a difficult skill is an understatement, one that Will.I.Am and Danny Jones of McFly, both attempted and failed, when Mark successfully auditioned for The Voice – Kids in 2019, making it to the final 60.

Mark said: “It was great to experience the audition process and what it was like on set but it was different from how I imagined it to be. Even though I didn’t make it further, it was great to be there and try.”

Mark is still doing what he can to help local charities, recently performing live on Facebook to raise funds for Glasgow’s Kindness Homeless Street Team project

To buy a copy of Marks DVD, find out more about upcoming events or watch previous videos visit his Facebook page www.facebook.com/markjmorrisonbagpipe