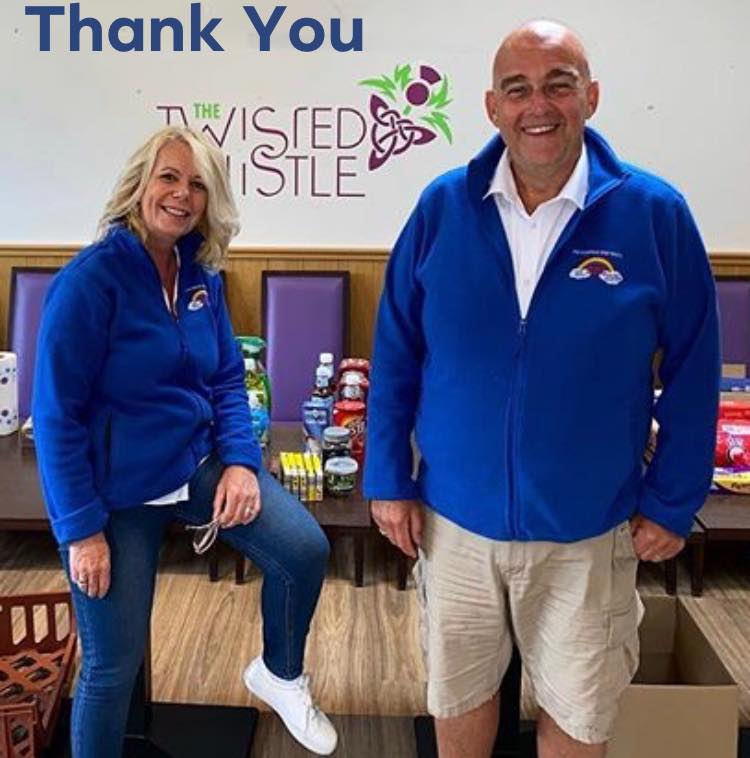 At the start of 2020 Maureen Cummings was an office manager at a Belvoire Letting Agency in the west end of Glasgow, a job she had enjoyed for the past 10 years.

Then in March when Covid struck and Scotland, along with most of the world, went into lockdown, both her and husband Gordon, found themselves furloughed and at something of a loose end.

The pair decided to offer their help to anyone in their village in Old Kilpatrick who needed shopping or prescriptions collected.

Maureen set up a small Facebook page, little expecting it would change her life.

It started with local shops contacting her to pass on left-over bread, milk and other items near their sell-by date.

Initially Maureen and Gordon were taking them up to foodbanks in Clydebank but within weeks the pair decided to concentrate their efforts closer to home and established Old Kilpatrick Food Parcels (OKFP).

Maureen explained: “We made up some leaflets and put them through doors in the village. People kept saying we were wasting our time because no-one in Old Kilpatrick needed food.

“On our first day at the start of May we gave food parcels to 21 people, the following week that had doubled.

“The donations started coming in fast and furious so we felt we needed more than one distribution place and the minister at Dalmuir’s Barclays Church offered us the use of their hall.”

In the first week just five people turned up, surprising Maureen who had expected a much higher demand.

It was then it dawned on her that many people who are struggling with food bills are also unlikely to see the promotions she was putting on social media.

So with the support of a local printer (CHECK) she had 2,000 leaflets printed and along with an ever-growing team of volunteers they did a leaflet drop across Dalmuir.

The next week 40 people turned up.

Fast forward four months and the OKFP team gave out a record 176 adult food parcels plus 91 children’s packs in a week.

After receiving a call from the Council’s Crisis team for an emergency food parcel delivery to the high flats in Mountblow, Maureen was shocked to discover there were families living in what looked like boarded up blocks.

Again this was part of her own learning journey about her community and the scale of poverty in some parts of it.

This eye opener spurred Maureen to action and the following week she took the food that hadn’t been handed out at Barclays Church up to the high flats and started beeping the horn of her car.

She quickly had the attention of local residents and handed out 11 food parcels.

When she went back the following week a queue of 18 people were waiting for her and two young helpers from the refugee community housed in some of the flats, offered to leaflet the blocks.

And she is adapting the parcels to meet the needs of the different communities that OKFP is supporting.

“In Old Kilpatrick and Bowling it is mainly older people, at Barclays Church it’s mainly families and in Mountblow we’re supporting refugees and people in recovery,” she said.

This has meant sourcing instant meals and pot noodles for the Mountblow flats, many of which have no cooking facilities and teaming up with Hungry Bites roll shop who are making up fresh filled rolls each week.

Maureen is committed to OKFP and though she is due to return to work it will be in a job closer to home.

“It’s a way of life for us now and we’re loving it. My mind is constantly thinking of ideas to help and I’m learning so much about my community.

“Before we would spend our money to go out to pubs and restaurants at the weekends or away on holidays to cheer ourselves up because work was so stressful.

“Now we’re spending 24 hours a day together working on something we both believe in.

“For something that is so horrendous as this pandemic has been we have found a way out of the rat race.

“It has been really great for us as a couple and as individuals, it has really helped my self worth and opened our eyes to what is around us in our community.”

Active Travel Boost For The Vale

by Amanda Eleftheriades The value of cycle ways, footpaths and beautiful open spaces right on our doorsteps have become more than evident over the past year. But for some the great outdoors can be dif...
View on Facebook
· Share

Can you put community into poetry?Have you captured summer in your snaps?If so, enter them into our Creativity Comps by emailing them to clydesidercomp@gmail.com There's £25 prize for each up for grabs!Closing date is 20th August 2020Good luck!#clydesider #competition ... See MoreSee Less

Find out more about the local Clydebank Can project and it's aims to bring life to the canal here: clydesider.org/2021/07/09/clydebank-can-sponsored-editorial/#clydesider #westdunbartonshire #clydebankcan ... See MoreSee Less

SPONSORED EDITORIAL Clydebank Can is a community-based project that aims to bring to life the canal and bandstand area of Three Queen’s Square in Clydebank by bringing more arts and leisure activiti...
View on Facebook
· Share