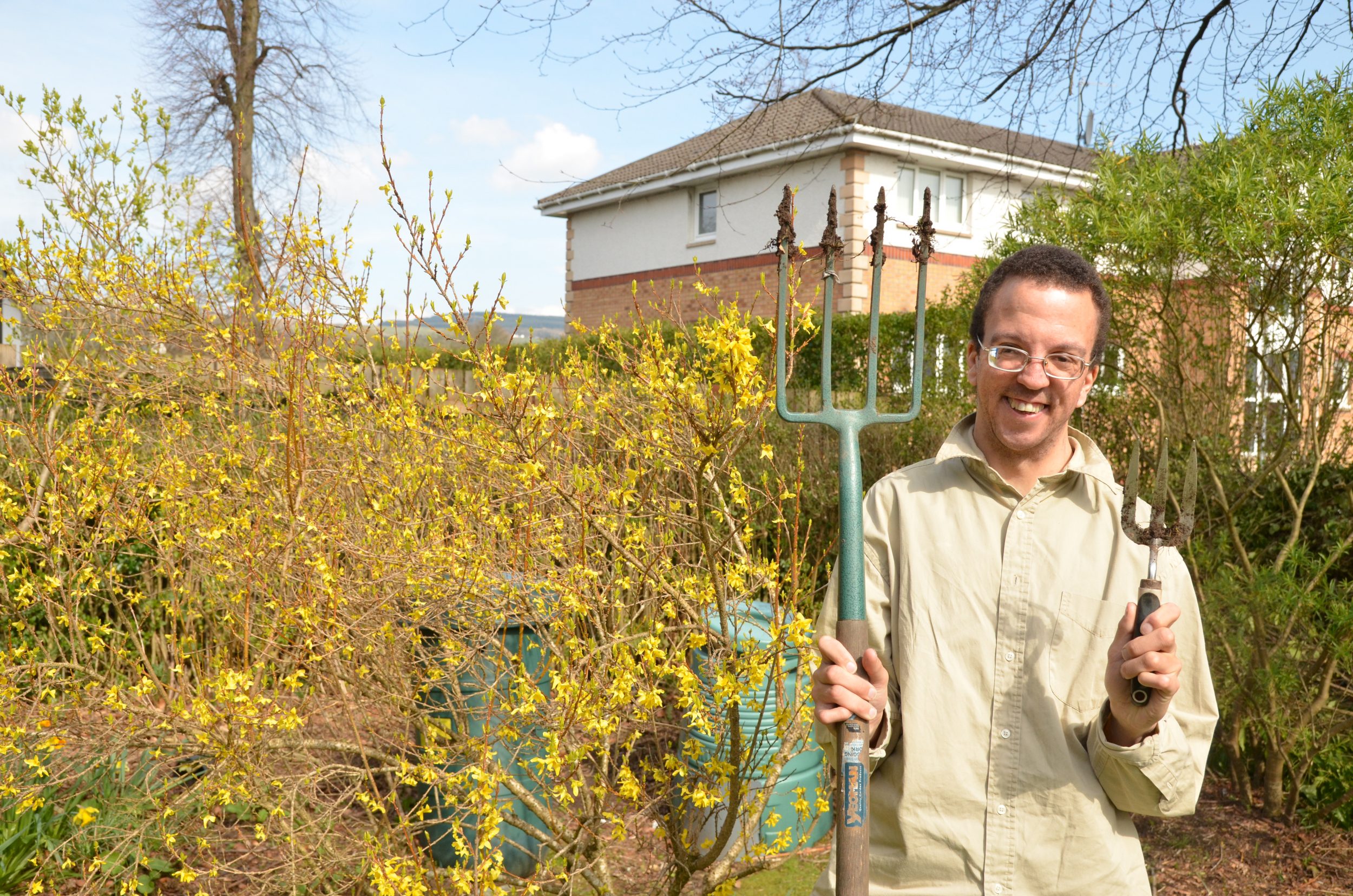 Words and Photos by Charlie Sherry

If you ever have the good fortune to come across Clydebank man, Johnny Dale, the chances are he’ll be confidently sharing his extensive knowledge of horticulture
in one of the community gardens around West Dunbartonshire or Glasgow where he regularly volunteers.

Or perhaps he’ll be heading to his wee Highland croft to maintain the native woodland he has single-handedly planted around it.

However, this was not always the case for the green-fingered Bankie.

Johnny’s early childhood memories are happy ones spent with his mother and grandparents: “I always remember lovely times with my mum and grandparents, full of laughter
and singing,” he reminisces.

But tragically Johnny’s happy childhood was cut short following the death of his mother in 1991 when he was just seven years old.

It took Johnny a long time just to understand what had happened: “From the age of seven until I was around 10 I didn’t understand what my mother dying actually meant,
I thought it just meant she had just gone away and she would be back at some point.”

Throughout this period, his grandmother Jean and step-grandfather Donald cared for Johnny, taking him away on regular holidays to Donald’s croft in Sutherland.

Johnny remembers: “They really took care of me, they were very loving, I looked upon Donald as my father, he took me out in his boat and all over the Highlands.

“He was really good to me, taught me so much about life, it was Donald that instilled in me my passion for nature.”

Donald guided him through this difficult period often telling him his mother had ‘gone to the happy hunting grounds’ and adding ‘she is still watching over you,
she will always be with you.’

Just as the young teenager began to cope with his grief and get used to the idea that his mother was never returning, he began to get severe headaches.

His optician noticed there was something not quite right with his eyes and referred him to the Eye Clinic in Glasgow.

It was there Johnny learned he had the eye condition Keratoconus, which, if untreated, can lead to loss of sight.

Johnny explained: “The condition limited my vision to such an extent that everything looked like one of those mixed up modern painting.

“This not only affected my eyesight, it tore any confidence I may have had to shreds, there were sometimes I felt really low.”

Johnny’s eyes got progressively worse until at the age of 18 he required cornea transplants to save his sight.

Passing of a loved one

A year earlier in 2001 Donald, the man Johnny thought of more as a father than a step-grandad, passed away.

He left a half share of his croft and 15 acres of land to Johnny and half to his other grandson Grieg who lives in Norwich.

The law states that in order to keep a croft, the owner must either live in the croft or make use of the land, otherwise they lose it.

Even though he was still grieving the loss of his best friend and struggling with his sight, Johnny was determined to make sure the future of the croft was secure and
what better way to do this than combine his passion for nature and the environment.

“I researched the possibilities for the croft and found out if I began planting a woodland made up of native trees then that would satisfy the usage conditions
to keep the croft in the family,” he explained.

But first Johnny had to teach himself how to create a natural woodland.

“I read up on how to plant trees, how the different trees require different conditions. I learned some trees prefer wet ground, whilst others thrive on dry.

“Now when I’m out walking with groups, I tell them what tree is what – they love it.”

To finance his woodland project, Johnny managed to source funding from the government.

Johnny is a regular visitor to his wee Highland croft. “I love to go up just to get away from it all, it’s the best therapy in the world, feeling closer to nature up there
in the wilderness.

“It’s great to see how the native woodland is developing, it’s an achievement I am very proud of.”

Possibility of good in every situation

When he is not up in his Highland hideaway, Johnny spends a lot of his time volunteering in the various community gardens around West Dunbartonshire
and the West End of Glasgow, he is always keen to get involved in any project that improves the natural environment.

“I really believe there should be community woodland and natural spaces with good facilities for all the community to have access to,
people shouldn’t have to pay a fortune to do so, in every town in Scotland.”

Having been through so much trauma in his early years, Johnny has this message for anyone who feels things may be getting too much for them:

“Bad things can happen, however, don’t see that as the end. It can be the beginning of something else, it’s up to you to make it something good.”