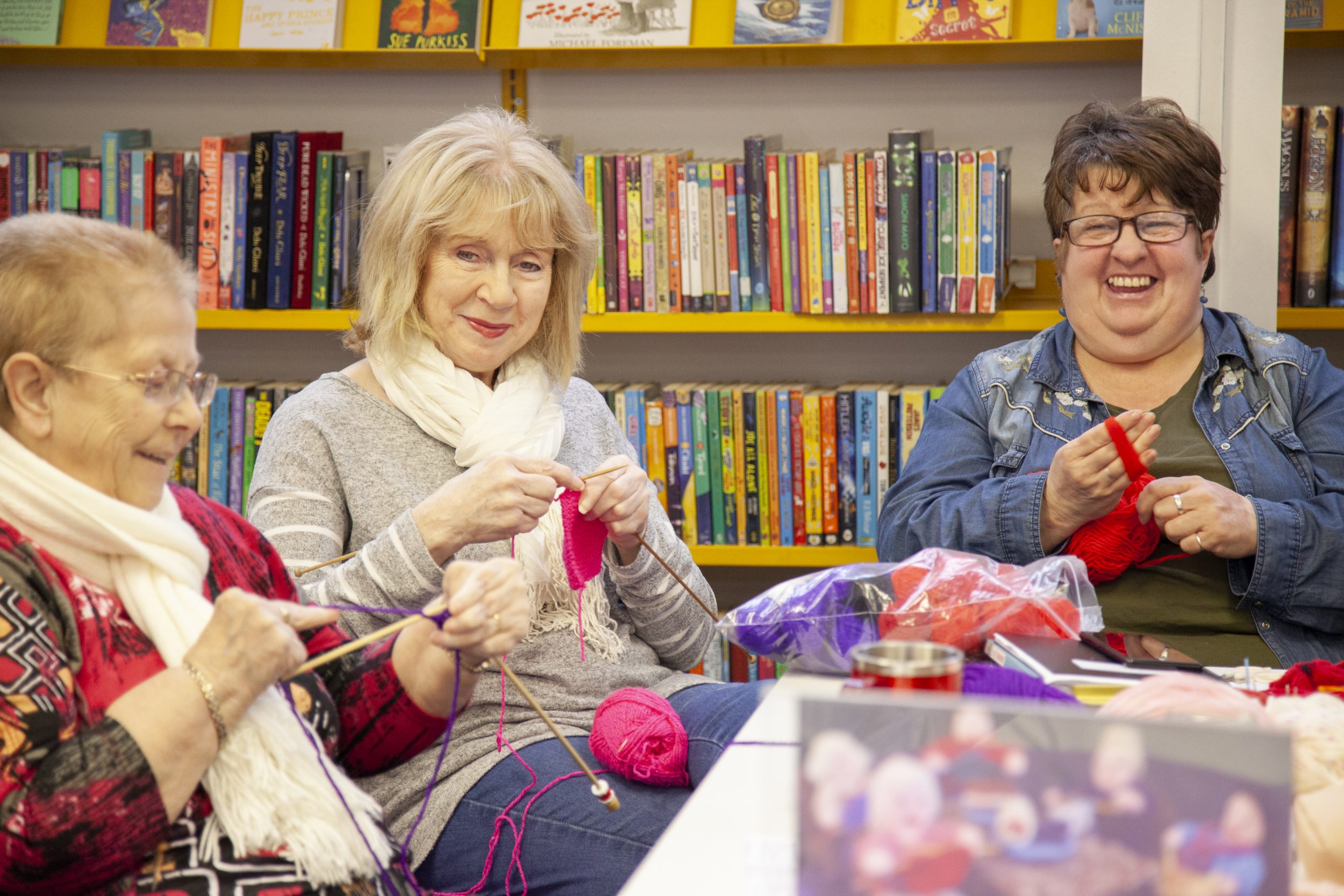 Knitting is not an obvious therapy for anxiety or depression but mixed with a healthy dose of blethering it can prove the perfect tonic.

Both groups are labours of love, run by local artist Mags Reid. “I’d always wanted to run a Knit n Natter group, I never thought I’d be running two. They feed my creative passion and I get to socialise with other adults.

“I really miss this after giving up work when my youngest son was born in 1990. I found being a lone parent and carer too demanding and had no option but to give up my job.

“We started slowly with just a couple of members and it gradually increased.”

Now 18 people attend the group in Dalmuir Library and 16 come to Golden Friendships Club, a handful of members go to both but each group is very different.

“It keeps me sane to have my own free time away from my caring role, it’s creative respite,” Mags explained.

The groups are creative, flexible and welcoming, anyone can go along and do their own thing, no-one is pressured to do anything or to talk if they don’t want to.

Mags said: “We’ve all lived different lives with different struggles, no one judges anybody. We always say nattering is just as important as knitting, it’s the company that means the most to a lot of our members.

“You can pop in for an hour once a month or stay for the full four hours every week, we don’t put any demands on anyone, come as little or as often as you like and you will always receive a warm welcome.”

Maureen Spratt, a regular for nearly a year, finds the groups help her mental health. “I really struggled with anxiety, I couldn’t use public transport on my own, I didn’t like leaving the house – and I couldn’t knit.

“I feel quite proud I’m part of this wee group. I used to sit in the house all day, for years I never went further than the local shop, so this has got me out of the house.

“My family moved away, my daughter lives in Australia and sometimes I felt I was no use any more so this really helped me.”

Mags added: “Maureen’s family is really proud of her having all these interests, they’re settled in their mind and not having to worry about her being on her own.”

When Liz joined the Golden Friendships group she hadn’t knitted for 40 years as rheumatoid arthritis made it too painful.

Mags let her try some bamboo needles which Liz found easier to grip. Now she just takes her time knitting and has breaks in between for a good natter.

Like Maureen, Liz suffered from anxiety and agoraphobia and sometimes stills struggles with panic attacks when she leaves the house to visit new places.

She enjoys how supportive the group is and is open about her anxiety: “I think it makes it a lot easier if the people in the club know you’re struggling so they can support you.

“If I’m around people who don’t know it makes me feel worse and I worry more that I’ll have a panic attack but if they know, I feel a lot more comfortable.”

Fighting isolation is one of the main reasons Mags started the groups. She said: “I thought there must be people sitting at home alone knitting, they could come here and have company instead.”

The biggest hurdle for many in the group is coming in the door that first time, worried they won’t be accepted.

“It doesn’t matter if you can’t knit just come along, sit and listen, have a cup of tea, it’s better than sitting in the house on your own,” Mags reassures.

It’s always difficult to go into an established group especially when suffering with issues such as anxiety or depression but everyone in the group speaks of the benefits of having a supportive social circle.

Ann said: “I still get depressed, I still get anxious but knitting is definitely good for me I know that, it gives me a sense of purpose.”

Each of the members joined for different reasons.

Christine Brennan joined when she was new to the area. “I moved home and I’m so glad I came along to the group, it was an easy way to meet new people, make new friendships and socialise.

“We have a shared interest in knitting and I love being inspired by getting involved in charity knitting projects, learning new things has given me a new purpose.”

The groups have worked on different projects for a variety of charities ranging from fidget mitts for dementia sufferers to yarn bombing for an event at Bowling Harbour, to hats for premature babies and trauma teddies for Police Scotland.

They also donated hats to ‘Hats for the Homeless’, raised over £460 for Erskine Hospital selling knitted poppies and £500 for Golden Friendships Charity.

Maureen said: “My family were so proud of me when they heard about the money we raised for Erskine, we had such a nice day out taking the cheque to them and getting shown around.

Many of the members enjoy the charity projects as no matter what’s going on in their own lives they feel a real sense of achievement when creating something to help others.

Mags said: “The charity projects give us something to work towards, it’s such a feel-good factor knowing you’re helping people, it puts things into perspective, especially if you’re having a hard day yourself.”

The Knit n Natter groups meet up for special events, go on days out together and encourage each other to be creative and brave in a gentle and supportive way.

Christine summed them up: “We all inspire each other creatively, everyone is so friendly, it feels like a nice safe place to be. It helps me feel part of something, we all help one another, like a little family.”

If you fancy a knit and natter pop into Dalmuir Library on a Wednesday from 10am-2pm or Golden Friendships Club on Monday from 11am-3pm.

**Due to the current situation with Coronavirus, the groups are not able to meet up but plan to start back as soon as it is safe to do so. They are still active on their Dalmuir Knit & Natter and  Golden Friendship Knit & Natter Facebook page’s, so feel free to visit them online, see what they have been up to and say hello.**

Katie is a wonderful photographer and has been volunteering with Clydesider for nearly a year. She is a valuable member of our team.
Check out more of her stunning photos at K.K.Photography ❤

The theme is 'Seeds of Hope'

Local writer and Clydesider volunteer Mary Irvine, has supported the magazine with contributions and ideas.
Now she's asking our community to support her with a quick vote for her book cover. Here's the link - allauthor.com/cover-of-the-month/8110/ - you know what to do. Tx
#VolunteersWeek ... See MoreSee Less