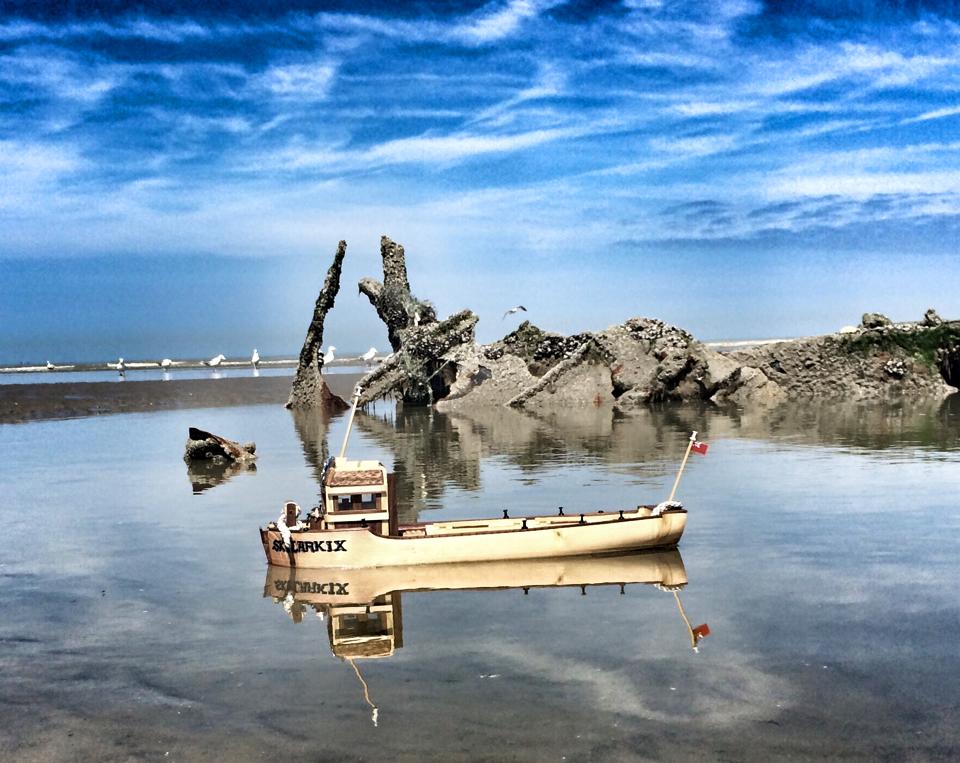 A little boat which once rescued hundreds of stranded soldiers from the beaches of Dunkirk during WWII, is again on a recovery mission.

This time Skylark IX is providing a lifeline to local people battling the dark and lonely world of substance misuse.

And the ripple effect of her rescue is already reaching out into the wider community with apprenticeships, training programmes and even plans to bring shipbuilding back to Dumbarton.

“On the anniversary of Dunkirk we used to sail on the Loch and lay a wreath or poppy petals on the water in memory of the Dunkirk Veterans.

“In 2010 the Skylark sank, it was very close to the anniversary of Dunkirk. That was when the campaign started and we put an appeal out for help from the community.”

Anne Dyer from Alternatives spotted the story in her local paper and thought it would be a good opportunity for some of the people they work with to get involved as volunteers.

She said: “The SOS came out and all it said was would any community group like to help save this wee boat. At that point we knew very little about the history of the boat – or Dunkirk. We thought, we have a community of people here who might want to get involved, perhaps we can help.”

After meeting members of the Veteran’s Association they realised it was a much bigger project so together they formed the Skylark IX Trust and began their own rescue operation to lift her from Loch Lomond’s murky depths.

“Since then we have walked, ran, swam and nearly drowned together to raise funds for this wee boat,” Anne laughs.

Andy Cochrane, Service Co-ordinator with Alternatives, led the charity’s fundraising efforts, setting up a ‘Spirit of Dunkirk’ team with residents staying in the charity’s Recovery House.

Their annual endurance fundraiser not only goes the extra mile to raise money for the Skylark’s rescue mission, it also helps participants in their own recovery.

“It started with a walk round Arran in 24 hours. It’s 56 miles and we’ve done that three years now,” Andy explained.

“We’ve also carried the Skylark propeller to the summit of Ben Lomond. Like walking to the top of the Ben isn’t difficult enough, we thought we would carry a 50kg propeller with us.

“And we’ve done the Three Peaks Challenge in 24 hours.

“We purposely make the challenges incredibly difficult because we want the guys to dig deep. Some of the stories how they made it round Arran are legendary and they use that in their own recovery.”

Andy says when the group start to struggle he reminds them what the guys at Dunkirk faced and still had to keep going.

“I tell them at least no-one is shooting at you or bombing you right now, a wee heel blister is not the end of the world – so keep going.

“It had to be difficult to mean something to everyone who took part, because it was difficult for those young guys in Dunkirk and I want them to remember that.

“So next year we’re going to do the Ring of Steel in Fort William, which is five Munros in a day.”

Lee is one of the veteran members of the ‘Spirit of Dunkirk’ team and has completed the Arran Challenge three times.

He was first introduced to the Skylark as a member of the local Army Cadets joining the Veterans Association for a Memorial Day service. Little did he know that years later Skylark would be helping his own recovery.

“My life spiraled out of control and I knew I was sinking. Alternatives has kind of pulled me out of the water and helped me rebuild my life again,” he explained.

“When I heard what they wanted to do to get the Skylark back up and running I wanted to be part of it.

“I have used all of that in my own recovery, the team-building and pushing myself with the likes of the Arran Challenge; it showed me no matter how wrecked I was I could come out stronger.

“Doing the Arran Challenge has totally changed my life. It takes you to a different level – knowing you can do something like that. I know now there are no limits if I put my mind to something.

“It is kind of like a war out there for some people. You come in here a wreck and they help rebuild you.”

Colin was also inspired by the Skylark to start looking after his own life again. He said: “Before all this I didn’t like fitness or physical exercises but the Arran Challenge changed all that.

“We got the ferry across at 5am and it was hammering down with rain. By mid-day all your clothes are wet through, at midnight a couple of boys drop out, another boy has to give in at 3am because his feet are all blistered and bleeding. I manage to soldier on until 6am and we found a wee toilet to stop and get some cover. I asked Andy to bandage my legs because they look like pulled pork but everything is so wet the bandages just fall off.

“At that point I had to drop out. It gave me a flavour of what those guys had to endure but I was just dealing with the elements, I wasn’t getting shot at and I knew I would get back.”

Anne said there are a lot of parallels between the boat and the client group Alternatives works with.

“It started with the Skylark but then it became much more than just getting the boat out of the water. The people from Alternatives who got involved saw their recovery linked to the boat’s, then more people got involved from all walks of life and everyone who has been part of this rescue has stayed with it.”

The boat is now at the Scottish Maritime Museum in Irvine and thanks to a successful Heritage Lottery fund boost of over £400,000 specialist work can begin on her restoration.

And the Skylark’s story is starting to spiral out into the community. Local primary and secondary schools are including it in their curriculum, apprenticeship and training programmes will help with the restoration work and the Trust is building links with Glasgow University.

Perhaps the most exciting spin-off from the original rescue mission is how the little boat has inspired the return of shipbuilding at Denny’s in Dumbarton.

Andy explained: “Dumbarton has strong links to rowing but hasn’t had a rowing team since just after the end of WWII.

“The Skylark itself needs specialist experts working on her but we thought it would be a great opportunity for our clients to learn new skills and get apprenticeships in boat-building by building these rowing skiffs.

“We’ll have a workshop at the Denny Tank Museum and will be bringing boat-building back to Dumbarton for the first time in years. We hope to get a team competing in the Castle to the Crane boat race.”

He added: “There will be people coming in here in the future who know nothing about Dunkirk and the boat’s story will help them and get them sailing through life again.

“When people see someone homeless or on drugs they don’t see the person behind or know their story. It was the same with the Skylark – most people just saw a wreck and didn’t know anything about her. Now they will know her back story and see she has a future, just like us, because our recovery will be part of her story.”