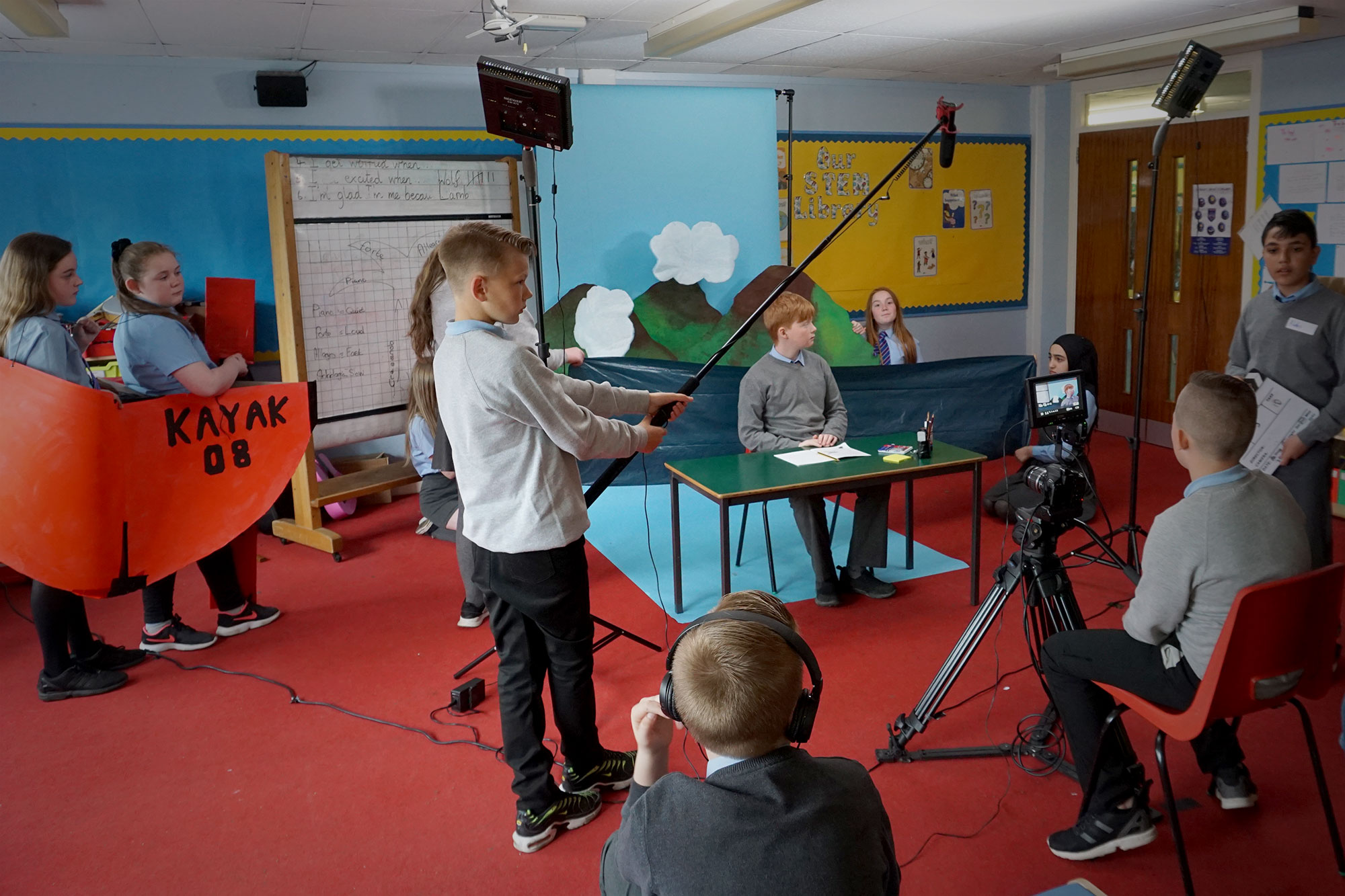 “Creativity is not determined by where we live – yet the links between creative careers and postcodes are undeniable.” It is this inequality which drives Braw Talent.

Former school teachers Darren Osborne, Lydia Everitt and Colm Keegan are on a creative mission to challenge this postcode lottery and encourage youngsters to develop their creative talents.

The trio are talented creatives in their own right. Young Bankie Darren is an actor and BAFTA nominee, specialising in filmmaking and graphic design.

Lydia, a Fine Arts graduate from Glasgow School of Art has had work exhibited in the Royal Scottish Academy and is part of the Scottish National Collective while Colm was lead singer with Irish sensation Celtic Thunder and was voted Best New Artist at the Irish Music Awards 2015.

The three colleagues were all teachers at St Peter the Apostle in Clydebank and what started as a lunchtime conversation eventually gave birth to Braw Talent social enterprise at the start of 2019.

Each had the desire to offer pupils creative experiences beyond the existing school curriculum, experiences that linked directly to a career in the creative industries, the fastest growing industry in the UK.

Last summer they took their creative masterclasses back to school at Our Lady of Loretto in Dalmuir where they worked with P7 pupils to produce a music video programme as a farewell project about their time in the school.

Colm thinks the programme is so successful because it combines their creative teaching skills in a range of different ways.

He said: ”We had some kids who were keen on the filmmaking and production who worked with Darren, another group wanted to work with Lydia to create the scenery and props and I took the kids who were interested in music and we recorded the Beatles song ‘With a Little Help from my Friends.’

The children had fun making the music video but the impact for some went much deeper.

Lydia explained: “One of the teachers told us there was a girl working with us who had been too afraid to even go into the same room where a performance was being held earlier in the year yet she loved acting in the music video alongside her classmates, the teacher couldn’t believe it.

“Another girl struggled with reading but she enjoyed art and she made these huge props and scenery backdrops, it’s amazing to see the confidence of these young people being developed.”

The creative workshops develop other skill sets and qualities that are often quite unexpected.

Darren added: “Creativity is applicable to everything; an art classroom or a music classroom are not the only places you can find creativity.

“Lots of different skills are used in creative projects like team work for example, everyone works on their own specialised area but at the end when it all comes together they’ve accomplished a film.

“They’re learning social interactions, encouraging one another and increasing their confidence. The most rewarding aspect of it is knowing that we’ve inspired the kids.”

In each programme Braw Talent run they have been warned about certain students who may struggle or find the group work difficult.

Yet these youngsters are the ones who jump in with enthusiasm in the non-traditional teaching environment and stand out as being talented creatively or great team members generously helping their peers.

Colm explained: “The model of a teacher talking and the student sits and listens taking in as much as they can, works for some people but doesn’t work for everyone. Some people are just really hands-on folk and learn by doing not listening. It’s really good to see them coming out of their shells.”

During the music video project they also ran an Oscars type award ceremony with the young people voting for their peers.

“It was great seeing some of the pupils who might struggle in class with traditional academic subjects win these awards after their peers nominated them for special recognition. It was really rewarding to see those kids who aren’t always celebrated in the classroom get that credit,” Colm added.

On A Creative Mission

Braw Talent’s mission is to show that creativity is open to anyone with the aspiration to try it.

Research shows that 78% of people who work in creative industries are from privileged backgrounds, while students from low-income families who take part in an arts activity at school are three times more likely to get a degree.

Braw Talent is keen to end this imbalance by raising the awareness of creative careers in less affluent areas such as West Dunbartonshire and providing the kids the option to at least imagine a career in the creative industries as a possibility for their future.

Colm said creativity has never been more accessible than it is today. “When we were kids if you wanted to do filmmaking you would have to go somewhere that had expensive cameras and equipment.

Over the summer the team also worked with youth charity Y Sort It running a six-week guerrilla filmmaking project.

Another programme they offer to schools is a Ted Talk style creative festival bringing together local people who work in a range of creative jobs to show youngsters the variety of options open to them in the creative industries.

As part of their social mission Braw Talent plan to offer free creative workshops to the local community. “We don’t want creativity to become a classist thing that is only for those who can afford it,” said Colm.

And Lydia added: “I think a lot of people can be overwhelmed by the cost of creative projects, it’s important to us to show that you don’t need to spend money to make films, that you’re voice can still be heard.”

To find out more about Braw Talent visit www.brawtalent.org