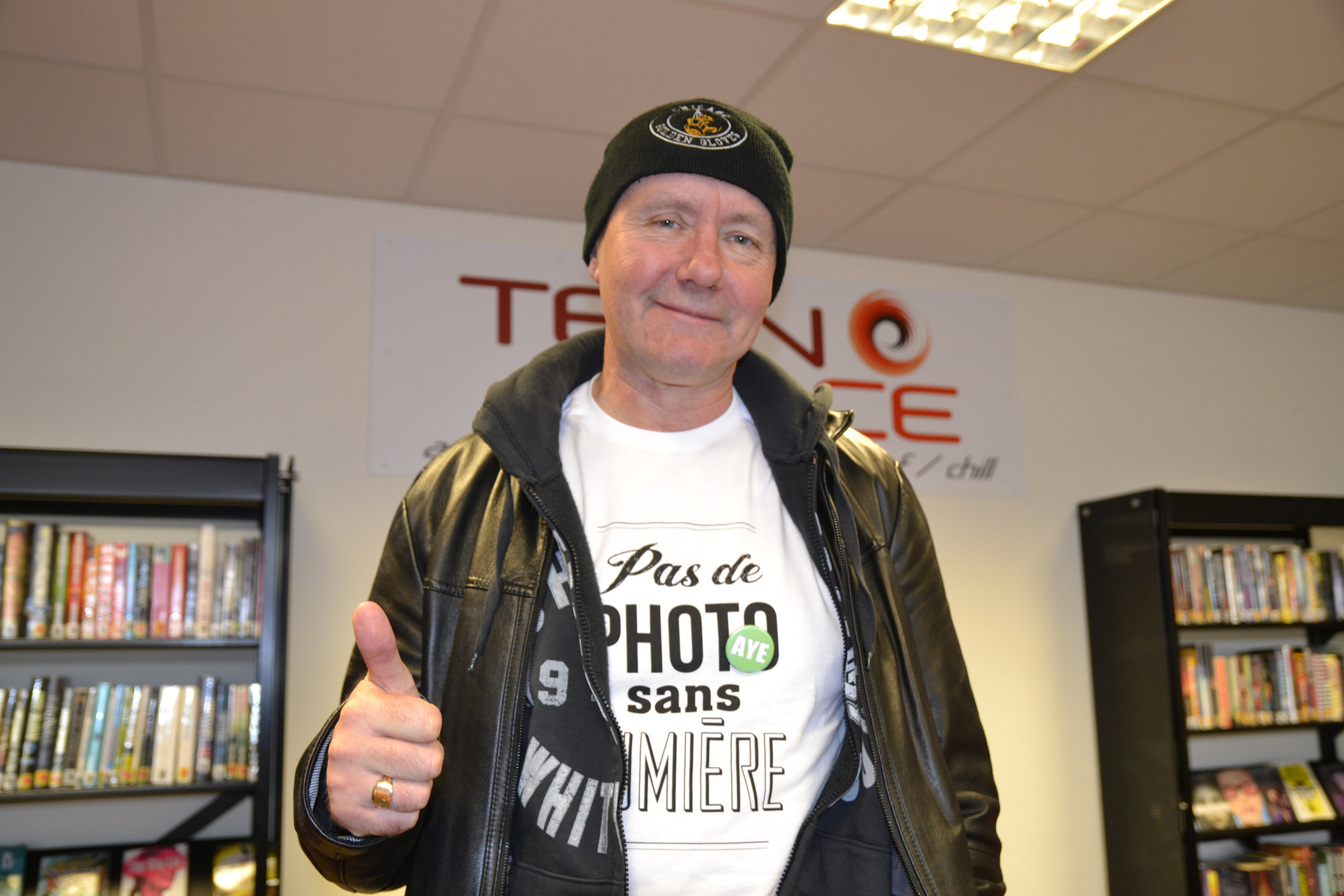 Words and photos by Charlie Sherry

“It’s shite being Scottish,” well it was at one time for bestselling novelist Irvine Welsh in the words of one of his most famous creations – Renton.

Sitting across from the great man, author, playwright, film director and producer in the pleasant surroundings of Dumbarton public library, I get the impression that his opinion on his nationality, like the country itself, has changed unrecognisably from that of the 1980’s – the period in which his most famous novel ‘Trainspotting’ is set. 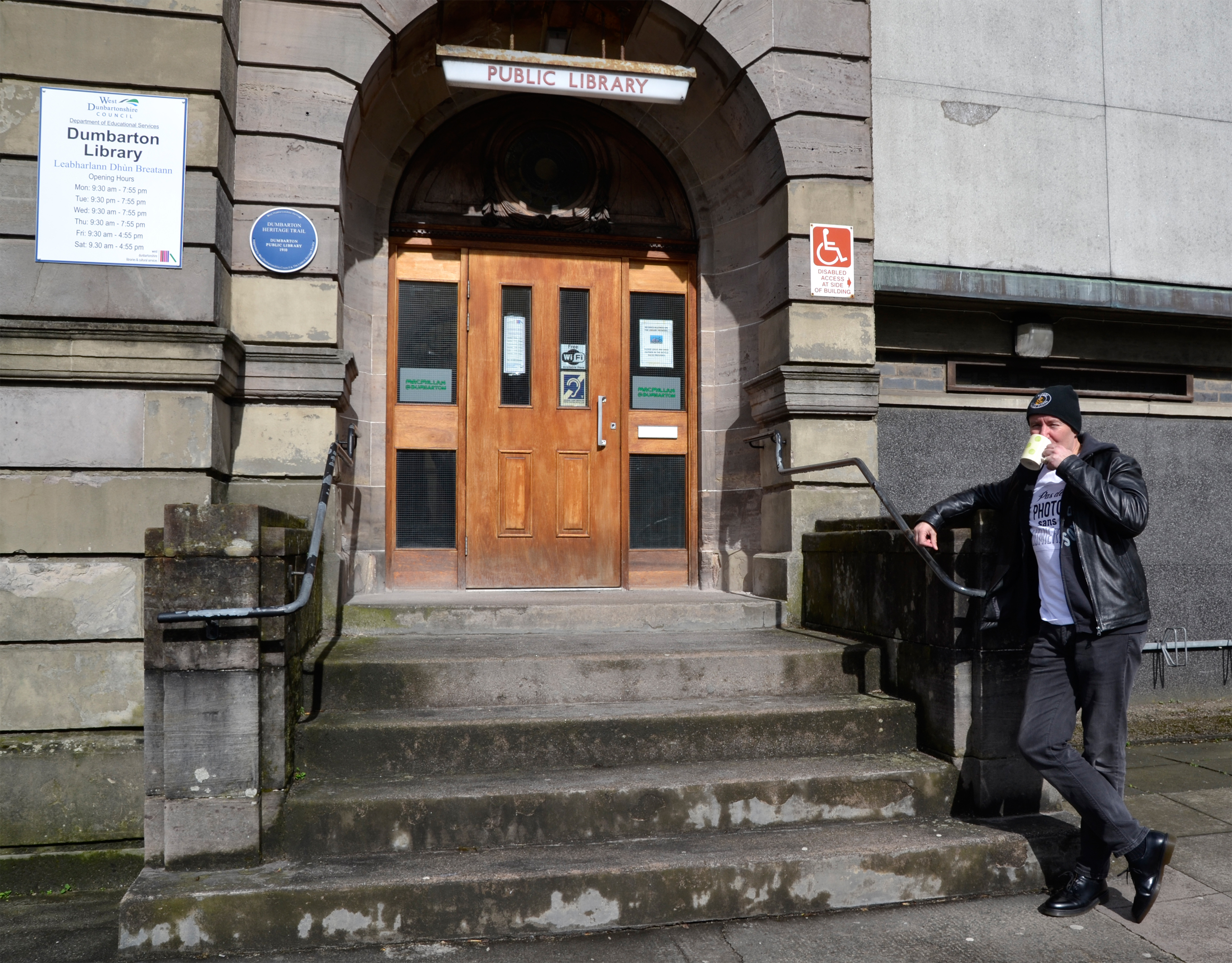 Looking at this giant of a man slouched in his chair dressed in black denims, leather jacket with a hoody underneath, a woolly hat and, the trademark of the non-conformist, the Doc Martin shoes, he looks more like a working class guy you would come across on the streets of his beloved Leith where he grew up, than that of an international bestselling author with all the fame and financial rewards that come with it.

That is what makes Irvine the man he is, the fact he has never lost sight of where he comes from, unlike many who escape the harsh world of the Scottish working class housing schemes and quickly take on a persona more akin to the rugby fields of Eton or Harrow, the sometimes controversial author is unmistakably Edinburgh proletariat through and through, both in appearance and talk.

Like most things in Irvine’s life, he did not take the conventional root to becoming a writer. Indeed, it was only through a chance meeting with an old school teacher, Miss Tait, while he was working as a TV engineer that led him on the path he travels today. As Irvine explained: “I always liked writing essays and stuff at school but I never saw writing as some sort of career choice.” Miss Tait, who had always been encouraging to him at school, asked if he was still writing and on hearing he was too busy working, told him he should get back to his writing as he had talent.

That brief encounter with his old English teacher re-ignited Irvine’s passion for writing and propelled him into a career that he openly admits is the only thing he was ever good at, that of a writer.

When asked if he believes enough is being done to encourage creativity and the arts across Scotland and, the working class areas in particular, the writer’s views on this, like his views on most subjects, were forthright: “It is not a case of what is being done, it’s more there has been so much done to destroy it.” He went on to explain: “The dole was anything but a perfect instrument but at least you could take a bit of time off, get together a band, spend some time writing, it gave the space you needed to be creative, with the new regime, sanctions and so forth, that is no longer an option.”

He added that forcing people into low paid, mundane jobs zaps the creative energy from them. The fact that public amenities such as libraries, community centres and hubs, where creative people used to meet, interact and discuss ideas, are being closed all over the country as a result of the austerity cutbacks, is a major factor in the lack of creativity and new talent breaking through, he believes.

The key to encouraging the creative arts in our communities is to move away from the concept that the arts are an industry according to Irvine. “People are splitting up the idea of work and money, young people here, and in the States where I live now, are doing jobs like waiting tables or working in supermarkets to get money but they don’t really see this as their work, they are making music, film-writing, painting, being creative in general. This is what they class as their work.

“Expressing their creativity, though not necessarily expecting financial rewards from it, the reward is in the creative process itself and the appreciations of other.”

Although Irvine now lives in Chicago, he visits his homeland on a regular basis, more often than not to watch a certain Edinburgh football club based in Leith and to visit the friends he grew up with and whom he is still very much in contact.

He holds very strong views on his homeland, indeed, during the recent campaign for Scottish independence came out very strongly and publicly in favour of a Yes vote and believes this is the third change in the Scottish psyche that he has witnessed in his lifetime.

He describes them as a first phase when all Scotland’s problems were the fault of the English: “When I was a kid the mentality in Scotland was, it’s all the English’s fault, everything that was wrong with Scotland the English were blamed for it.” He felt it was a very bitter and antagonistic attitude and for his part, did not buy into it.

As he got older, around the mid-1980s, Irvine noticed a change in focus on who was to blame for his nation’s predicament, gone was  “blame our Southern neighbours” for all Scotland’s woes, to; it’s our own fault for letting ourselves get into this situation in the first place, as he explained: “The second phase is like the Renton period, it was like a self-hate thing. It’s nothing to do with the English; we are where we are through our own stupidity, a self-flagellations thing.”

Irvine believes the phase Scotland is in now has created “a massive growth in confidence and self-awareness,” no longer does he feel the Scots are a nation of perennial moaners, malcontents, forever blaming England for everything that goes wrong. “It doesn’t really matter whose fault it is, it’s up to us to sort it out. Scots now have a positive can-do attitude which bodes well for the future.”

For all his confidence in the future, the reader would do well to remember that Irvine is a product of the Leith streets he was brought up on and therefore has Hibernian Football club and their fortunes in his DNA.

Given that his beloved Hibs are struggling to get back into the top tier of Scottish football, one has the feeling that if they fail to do so, there will be no sunshine on Leith and Mr Welsh may agree with Renton once again and think: “It really is shite being Scottish,” So for Irvine’s sake and Scotland’s future: C’mon the Hibees! 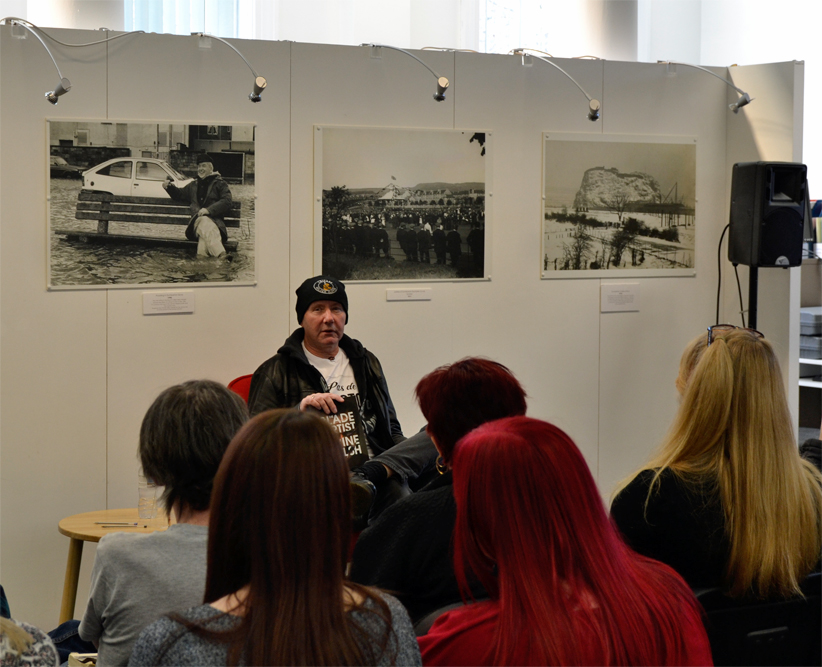